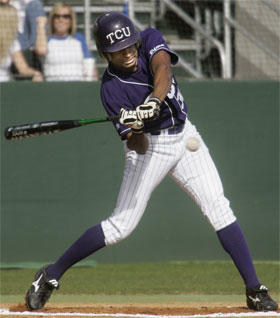 The Horned Frog baseball team rallied from behind to defeat the Wright State Raiders 4-2 in game three Sunday afternoon at Lupton Stadium after trailing for three innings.Head coach Jim Schlossnagle said the team was anxious going into the game coming off the back-to-back win and loss against the Raiders on Saturday. He said that although the Frogs were happy with the win in the second game, they were disappointed with the loss in the first and looking for a turnaround.

“The fact that we finally got a good day of weather was the best motivator,” Schlossnagle said.

The first run for the Frogs (6-4) came in the sixth inning when junior outfielder Keith Conlon hit to the fence in right field, bringing in sophomore short stop Bryan Kervin for the score. The Frogs had been down 0-2 to the Raiders (2-3) since the top of the second when Raider outfielder John Kopilchack had hit a home run, bringing in one other runner.

Both teams were held scoreless until Conlon’s hit, and the Raiders were to see no more success at home plate.

The bottom of the eighth inning had three pitching changes for the Raiders. Sophomore designated hitter Matt McGuirk said this is to be expected toward the end of games, especially in close situations. Teams will often use pitchers who throw from the same side from which the batter bats as strike out tactics.

“They did that to me yesterday and struck me out,” McGuirk said. “Today, I faced the same guy . just different results.”

The results were indeed different as McGuirk hit a grounder to right field, bringing in a runner to score for the Frogs.

The next run came when the pitcher for the Raiders committed a balk, a pitching foul, causing the runner on third to be brought in for the score.

The final score for the Frogs came with 2 outs in the eighth as senior outfielder Ryan Pack, who was pinch-running at third base, stole home and was called safe while junior outfielder Austin Adams was at bat.

The Frogs held the Raiders scoreless the last seven innings, thanks in large part to junior pitcher Brad Furnish, usually a starting pitcher, who earned a save for the day. Furnish said he enjoys the pressure that comes along with the team’s victory being on his shoulders.

“I like a situation where I can help the team finish,” Furnish said.

The Frogs take to the field next when they face the Dallas Baptist Patriots on Tuesday at Lupton Stadium at 7 p.m.