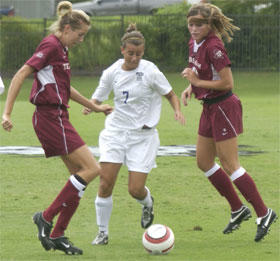 Fans on Sunday filled the bleachers, lined the fences and spilled out onto the grass of TCU’s Garvey-Rosenthal Stadium to watch the soccer team take on No. 6-ranked Texas A&M.The turnout of 2,200 set a new attendance record.

Despite the fan support and strong play toward the end of the first half, TCU fell to the Aggies 4-0.

“I was disappointed because I think we have much more than what we showed today,” Abdalla said. “If we step up, we can play with a team like A&M.”

A&M scored its first goal in the fifth minute, as forward Ashlee Pistorius took a direct kick that landed in the upper-right corner of the goal.

As the clock wound down toward halftime, A&M forward Suzzette Devloo scored in the last minute of play to make the score 2-0.

The Frogs’ play did not improve in the second half, and the Aggies scored their last two goals in the 58th and 84th minutes of the game.

Junior defender Breanne Kaldheim said the team needs to work on fighting hard and not giving up.

“We need to improve our focus,” she said. “(We need to learn) to have more heart.”

TCU had better luck earlier in the weekend when it opened its season Friday with a win over Texas Tech.

With their record now standing at 1-1-0, the team will travel to Dallas to play Southern Methodist at 7 p.m. Friday.