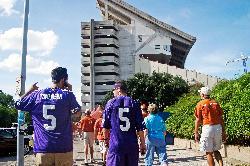 In a city known for its affinity with burnt orange, a wave of purple descended upon Austin on Saturday.

Horned Frog alumni and students congregated in the parking lot of the Frank Dennis Fields in the hours leading up to the football team’s showdown with the No. 7 Texas Longhorns in a match-up of two top 20 teams.

“We brought a television for the tailgaters,” Wells said.

Other fans, however, donning the Horned Frog purple and white entered the realm of Longhorns tailgating, while avoiding glares from UT fans.

While many Horned Frogs fans made the trip to Austin, the number of fans paled in comparison to the numbers typical of Big 12 opponents such as Nebraska, Oklahoma State and archrival Texas A&M, said Bryan Whoorley, a Travis Co. sheriff.

Regardless of the outcome, Frogs fans made the journey to Austin to see a new chapter in TCU football history.