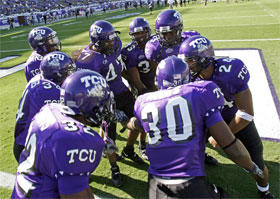 With five-straight wins on the line, the Horned Frogs put it all together in a 52-0 win over conference opponent the San Diego State Aztecs. While the defense shut out the Aztecs and allowed just one legitimate scoring chance be left to the fate of a missed field goal, senior quarterback and junior wide receiver stood out in an offense that clicked and completely dominated the competition.

“It’s a lot of fun,” Ballard said. “The game just comes to you and it’s great when all your players have confidence in you.”

Massey came into the game somewhat lacking confidence, but, even after a muffing the game’s initial kickoff, he and Ballard combined for three touchdowns and 100 yards passing.

It was good to see Donald do some things, because I think he lost some of his confidence when he fumbled the opening kickoff,” head coach Gary Patterson said. “Then he came back and caught three touchdowns passes and that got him going a little bit.”

Massey wasn’t the only player who had to overcome feelings of doubt.

After passing for just 25 yards last week against the New Mexico Lobos, Ballard finished 20-23 with 288 yards that resulted in five passing touchdowns. And, with another touchdown on the ground, Ballard took a break halfway through the third quarter with six total touchdowns.

“I really can’t explain it,” Ballard said. “It seemed like we just connected on everything and the offense was in sync tonight.”

“We had a rude awakening after last week’s game,” Harmon said. “This week in practice coach kept grinding on us and we realized that we work too hard and have too many tools not to succeed. Jeff did a great job tonight and passed the ball around to everyone really well.”

With the big score on the board and looking ahead to the next season, Patterson said he was happy to get some younger guys into game to get some experience and keep veterans healthy.

“The thing I was worried about was injuries in the second half, and since we jumped ahead, we got a chance to play a lot of our younger players.”