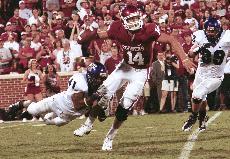 Following the 35-10 loss to the new-No. 1 Oklahoma Sooners, the Frogs have dropped out of the top 25 after being there for one week.

This most recent trip to the top of the AP poll was Oklahoma’s 96th in its history, passing Notre Dame for the most ever in the NCAA.

“They are deserving,” head coach Gary Patterson said. “In this day and age, if you win all of your football games, you deserve the right.”

Oklahoma head coach Bob Stoops and his players had little to say about being ranked No. 1.

“We’ve still got a long way to go before we even think about where we’re ranked in the polls,” sophomore quarterback Sam Bradford said. “Right now, (the rankings) pretty much don’t mean anything.”

Bradford is widely considered to be a candidate to win this year’s Heisman Trophy, and he did nothing against TCU to make anyone think any different. The quarterback opened the game by throwing for 199 yards in the first quarter, a school record, on his way to a 411-yard and four-touchdown performance in the victory.

“You got to give it to Bradford,” senior linebacker Jason Phillips said. “He made some great throws.”

Patterson said he takes responsibility for some of the defensive calls made in the first quarter in which Oklahoma scored 21 points.

“A lot of that was my fault,” Patterson said. “We were trying to blitz and get them into some fourth downs and make them punt, and they made big plays.”

“I told him that’s one of the best performances of a wide receiver we have had in 10 years,” Stoops said. “It ranks up there with anybody we’ve had. That’s a pretty special night.”

The Horned Frogs came into the game with the No. 1-ranked total defense in the nation, allowing just 183 yards of offense per game, but TCU dropped to sixth after giving up 436 total yards against the Sooners. The Frogs now allow an average of 233.6 yards per game.

“(Oklahoma) came out to play, and we didn’t match it,” Patterson said. “They are very athletic. I think what they are doing on offense with the hurry-up is going to cause a lot of teams some problems. Just the tempo of their offense bothered us.”

The brightest spot of the Frogs’ defense came from the run defense, which allowed just 25 yards on the ground.

“Regardless of how someone is playing, you still should be able to move the football and create some scenes,” Stoops said about his team’s running game. “It’s o-line, it’s tight ends, it’s backs, it’s everybody. It’s everybody doing it together. We have to be better at moving the football together.”

TCU continued to struggle in the penalty department committing 12 penalties that cost the team 66 yards. The Frogs are now the third most penalized team in the country. The Frogs also lost the turnover battle for the first time of the season, giving the Sooners the ball four times, twice on fumbles and never taking the ball.

“When you play against good teams, you can’t turn the ball over and you can’t have penalties,” Patterson said. “You can’t play at second-and-15. We have been talking about that for two weeks.”

Patterson still thinks his team will have a good remainder of the season after dropping out of the top 25.

“I believe this is a very good football team at TCU,” Patterson said. “I believe that before it is all said and done, if (TCU) decides to play four quarters and compete when they go on the road, they will win a lot of football games.”