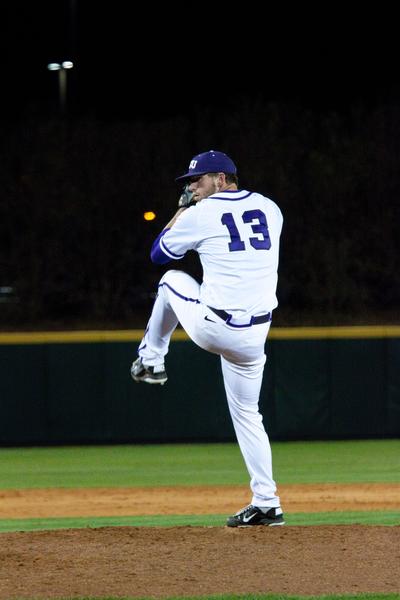 The definition of insanity, said TCU head coach Jim Schlossnagle, is continuing to do things over and over and thinking something is going to change.

No. 8 TCU couldn’t overcome four errors in a 4-3 loss to Dallas Baptist Tuesday night as the Frogs surrendered a lead in the ninth inning for the third straight game.

Even though junior shortstop Taylor Featherston knocked in two RBIs and hit his first home run of the season, 3,877 fans at Lupton Stadium witnessed the first three game losing streak for the baseball program since March 2008.

The Frogs fell to 4-4 on the season and 1-1 on Tuesday evening games, while DBU improved to 6-2 on the season.

“We refuse to hit the ball the other way, [our hitters] stand up there and roll over and hit [themselves] pop ups and ground balls to the left side of the infield,” Schlossnagle said. “It’s not gonna change until we change.”

Featherston hit a home run off Patriots’ starting pitcher Brandon Williamson over the right field wall to put the Frogs up 1-0 after sophomore third baseman Jantzen Witte bunted in to a pop-up double play.

Crichton walked center fielder Landon Anderson in the fifth inning and Anderson stole second. Crichton made his second throwing error of the game, allowing Anderson to advance to third.

Later in the inning junior center fielder Aaron Schultz and sophomore right fielder Kyle Von Tungeln ran into each other chasing a fly ball 8212; Von Tungeln dropped the ball after the collision and Anderson scored from third, tying the game, 1-1.

It was Von Tungeln’s second error in left, and the Frogs’ fourth of the game.

The run may have been unearned, but it was enough for a pitching change. Junior right-hander Kyle Starratt replaced Crichton with one out.

Patriots’ catcher Tyler Robbins hit a ball off the left-field wall for a double to score another Patriots unearned run, putting DBU up 2-1 in the fifth with two outs.

In the bottom of the fifth Von Tungeln coaxed a walk out of Williamson.

Junior designated hitter Brance Rivera grounded out, but advanced Von Tungeln to second, bringing Witte up to the plate with two outs.

Witte roped a ball down the third baseline for an RBI double, scoring Von Tungeln to even the score, 2-2.

With two outs and Witte in scoring position, Featherston knocked a single to center field for his second RBI of the game, putting the Frogs up 3-2.

“We didn’t do ourselves any favors by throwing the ball out on the field, not catching the ball in the outfield,” Schlossnagle said. “We got to find a way to start our season over starting tomorrow.”

DBU shortstop Joel Hutter singled to get on first to start the inning off. DBU first baseman Ryan Behmanesh hit a ball just fair in left field for a double, putting runners on second and third with no outs.

Right-hander Jordan Staples replaced Williamson in the seventh for Dallas Baptist and Miller replaced Starratt in the ninth for TCU. Starratt finished the game allowing three hits and one earned run in 3 2/3 innings.

Miller, who ended the night with a 7.71 ERA, put runners on the corners after Anderson’s first hit of the night with one out. DBU left fielder Josh Wilson hit an RBI single from the ninth spot in the batting order to give the Patriots a 4-3 lead.

With two outs and Jordan in scoring position on second, Featherston flied out to center to end the game. Dallas Baptist’s Chris Haney would pick up his second save of the season.

“Baseball’s a weird game, right now we got a new line up, we got to figure out what’s going on, we’re just trying to do to much,” Featherston said. “We’re trying to do something we’re not.”

TCU continues its nonconference slate at Texas Tech for a three-game weekend series. Friday’s first pitch is set for 5:30 p.m.