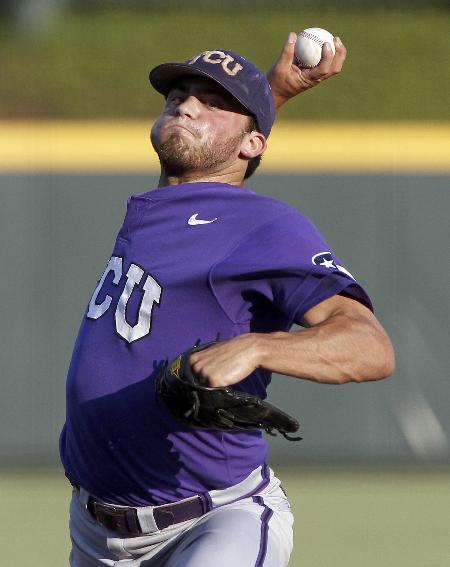 TCU took one step back instead of taking one giant leap forward after wilting to UCLA’s All-American Gerrit Cole in a 6-3 loss Monday.

The Frogs must now win three games in a row to advance to the College World Series Final, and that starts with a rematch against Florida State, which will begin 50 minutes after the conclusion of Tuesday’s suspended Oklahoma-South Carolina game due to inclement weather on ESPN2.

Had TCU found a way to solve Cole for more than just the seventh inning Monday, the Frogs wouldn’t have had to play another game until Friday, and that game wouldn’t even have been a must-win to advance to the Final.

It would have been a comfortable, and familiar, situation for TCU-the Frogs found themselves in UCLA’s situation during the Fort Worth Regional, defeating Baylor 9-0 in the first of two tries in the Regional Final. The Regional was the same double-elimination format as the CWS.

Instead, UCLA gets the three-day furlough that is awarded to the survivor of the winner’s bracket-the Bruins will also have two shots to win one game to advance to the Final against the Bracket 2 winner.

“I’m sure UCLA is certainly sitting pretty, ” said TCU head baseball coach Jim Schlossnagle. “But I like the guys we have left to pitch. And with the days off and the fact that we haven’t used (Tyler) Lockwood yet and (Steven) Maxwell hasn’t pitched; and (Matt) Purke’s certainly come back on six, seven days’ rest.

“We just have to, right now, be totally locked in on playing well against Florida State. “

TCU blasted FSU 8-1 in the opening game up the 2010 CWS, but the Frogs won’t be able to rely on their only sure-fire Freshman Pitcher of the Year Matt Purke, who leads the NCAA with 15 wins.

Purke dominated FSU in Game 1, allowing no earned runs and tallying seven strikeouts in seven innings. It was probably the most dominant pitching effort in the CWS until Cole’s 13-strikeout performance against TCU Monday.

It is likely that TCU will start Steven Maxwell (11-2, 2.41 ERA) against Florida State, while FSU’s John Gast (7-3, 5.53 ERA) is listed as the Seminoles’ probable starting pitcher.

Schlossnagle broke the rotation order that secured TCU’s berth to the CWS during the Austin Super Regional against Texas by moving Kyle Winkler ahead of Maxwell to pitch against UCLA. When asked why he flipped the two starters in the rotation, the response was another flip of sorts.

“But honestly, between (Maxwell and Winkler) it’s a toss-up,” Schlossnagle said. “And once we won the first game (against Florida State), you knew that all three of them were going to pitch. it’s a coin flip, to be honest.”

Schlossnagle noted that what actually prompted the rotation swap probably had more to do with the fact that Maxwell lasted less that four innings while throwing 82 pitches, giving up five runs in the process (none earned, however).

A game later, Winkler out-dueled two of college baseball’s finest pitchers in Texas’ Brandon Workman and Chance Ruffin to clinch TCU’s first berth to Omaha; Winkler didn’t allow a run in 7 2/3 innings pitched in what was the equivalent of a home game for the Longhorns at Disch-Falk field in Austin, TX.

TCU had a quick preview of Gast in Game 1-he pitched a scoreless inning of relief work, with two strikeouts and one walk.

The Clemson-Oklahoma game was suspended Tuesday due to inclement weather and will resume at 3:30 p.m. tomorrow on ESPN2. The game, suspended while Clemson held a 6-1 lead going in to the sixth inning, may push back the original 6 p.m. start of the TCU-FSU game, which will now start 50 minutes after the conclusion of Clemson-Oklahoma.

South Carolina eliminated no. 1 overall seed Arizona State in stunning fashion, blowing out ASU 11-4. The Gamecocks will play the winner of the Clemson-Oklahoma game for a chance to advance to the CWS Final.