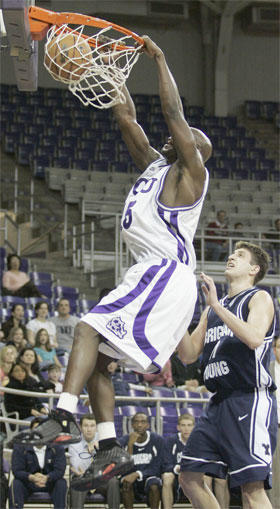 The Horned Frogs are looking tonight to not only avenge an earlier loss in the season to Utah, but also get a win at home on Senior Night. The men’s basketball team will play host to the Utes (12-13) at 9 p.m.; the Frogs will have their hands full as they will do their best to contain Utah’s freshman center, Luke Nevill, who scored 18 points against TCU earlier in the season.

Head coach Neil Dougherty said the key to the game will be controlling Nevill’s play.

“Luke is a great player down on the block,” Dougherty said. “He can use either hand on the low past. He is also a legitimate 7-footer and has great vision and passing ability. If we can force him up and keep him out of the paint we can better defend Utah’s offense.”

In the first meeting between the two teams on Jan. 28, the Horned Frogs (5-23) played well in the first half and Utah only led 27-25 at halftime. But in the second half the Utes took control of the game, starting the second half with an 11-3 run, and ultimately won the game by a score of 80-45. Utah shot 50 percent from the field and 11-25 from behind the arc; TCU shot only 30 percent, including a dismal 4-21 from three-point range. The Utes also kept up the pressure as they had 13 more rebounds than TCU and forced 15 turnovers.

The Frogs’ leading scorer, Nile Murry (16 points average), who was held to just 8 points on seven shot attempts earlier in the year, said he feels the Frogs are ready this time.

“The team and I just have to play aggressive for the entire game,” Murry said. “In the first we came out and played hard, but in the second half, we didn’t keep up the aggression, which led to Utah getting the scoring runs that they did.”

Murry also said the team will benefit from the university’s acknowledgement of the team’s seniors.

“Since it is Senior Night, I feel that it will be a good Horned Frog atmosphere and keep up the team’s aggression this time around,” Murry said.

Senior forward Chudi Chinweze, who led the Horned Frogs in scoring with 9 points against Utah in January, said the Frogs have to tighten up their defense to be successful on offense.

“We have to be more aggressive this time and learn from our previous mistakes,” Chinweze said. “By playing better defense we can create turnovers, which will then lead to us controlling the ball more and getting more field goal attempts.”

Dougherty said the Frogs will have to be opportunistic on offense to combat the Utes still defense.

Despite its record, Dougherty said he has been very pleased with his team’s effort throughout the season.