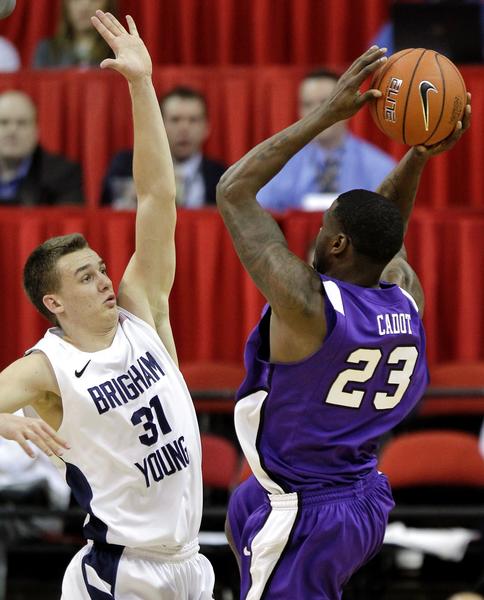 TCU took the lead into halftime against the Mountain West’s top-seeded Brigham Young, but No. 8 BYU came up with the key plays in crunch time during a 64-58 Cougar victory in the quarterfinals of the 2011 Conoco Mountain West Championship at the Thomas & Mack Center.

The loss put an end to TCU’s season as the Frogs finished with an 11-22 overall record. BYU, which improved to 29-3, advanced to the MWC semifinals, where it will face New Mexico, which defeated Colorado State in its quarterfinal game.

The Frogs put together one of their gutsiest efforts of the season Thursday in an attempt to stave off elimination. The squad led by as many as four points just before halftime and took a 31-30 edge into the locker room.

BYU regrouped early in the second half, recording a 7-0 run to open the period to move on top by six points. TCU was able to keep the game within reach the entire second half until a last-ditch effort in the final minute after senior guard Greg Hill, who had exited the game earlier with an ankle injury, returned to the floor. Hill followed with seven straight TCU points on a pair of 3-pointers, including one on which he was fouled, to pull the Frogs to within two, 60-58.

Hill and Thorns tied for the TCU team lead with 15 points each. Thorns scored 13 in the first half while going 3-for-3 from beyond the arc. He added a game-high six assists. Hill finished the contest 4-of-9 from 3-point range. Both Frogs pulled down five rebounds. Junior guard J.R. Cadot and sophomore forward Garlon Green also reached double figures with 12 and 11 points, respectively. Cadot paced TCU with six rebounds.

TCU experienced a hot-shooting opening period from outside the arc while building its halftime lead. The Frogs made 7-of-12 attempts from 3-point range in the opening 20 minutes, which matched the squad’s most 3-pointers in a half this season. The squad finished the game 9-for-19 from outside.

While the Frogs leaned on their shooting early, it was a gritty defensive effort that gave the squad a shot at victory. BYU’s 64 points matched the squad’s lowest total in a game this season, while Fredette was held to 24 points or fewer for only the 11th time. When combined with the two teams’ regular-season meetings, TCU held Fredette to three of his 11 lowest totals of the year.

Also scoring in double figures for BYU were forwards Charles Abouo and Noah Hartsock with 14 and 10 points, respectively. Abouo and forward Kyle Collinsworth totaled eight rebounds each while leading the Cougars to a 33-25 advantage on the glass, which BYU was able to turn into a 17-2 edge in second-chance points.

TCU and BYU went back-and-forth in a first half that featured seven ties and eight lead changes. The Cougars were able to build a seven-point lead in the first eight minutes before three consecutive Frog 3-pointers by Thorns, Green and Hill evened the score. Another Green trey with 1:35 remaining in the half gave TCU its largest lead at 34-30 before Fredette drilled a 3-pointer of his own to bring BYU back within one point with 40 seconds left.

The Frogs’ sharp shooting trailed off in the second half as the team made only 9-of-23 attempts from the field following intermission. Just as costly were seven second-half turnovers that resulted in 17 Cougar points. TCU was able to keep itself in the game in the final 20 minutes because of its defense, as BYU was limited to only 36.0 percent shooting in the period. The squad made only 6-of-23 attempts from outside the arc for the contest.

TCU finished its season with an 11-22 overall record.

TCU held BYU to 64 points, which matched its lowest single-game total this season. The Frogs are only one of three teams to hold the Cougars under the 70-point mark in 2010-11.

The Frogs, who led 31-30 at intermission, became only the fifth team this season to own a halftime lead against BYU.