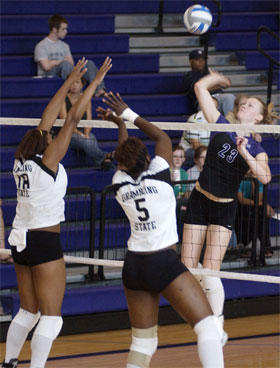 Over the weekend, the Horned Frog volleyball team went 2-1 in a tournament at the University Recreation Center that was cut short by Hurricane Rita’s anticipated arrival.The team fell to Winthrop on Friday in five sets as the Eagles fought through tough competition to claim victory.

Sophomore LeMeita Smith led the Frogs to a win in game one with her five kills and one block.

Game two began with three straight aces by Anna Vaughn, but the Eagles quickly recovered to win the game, with Taryn Surbaugh and Mary Hock combining for nine kills and 2.5 blocks.

For the Frogs, sophomore Talaya Whitfield, who took home all-tournament honors, racked up her second double-double of the season, finishing with 22 digs and 15 kills.

Afterward, Vaughn said the loss provided motivation for their next match.

“It was a great match,” Vaughn said. “We fought hard and felt we should have won.”

The second match paired up the Frogs with the Tigers of Grambling State.

TCU tied a school record with 17 aces, improving its overall record to 9-4 on the season.

After the match, head coach Prentice Lewis commented on the team’s strong play.

“We played fantastic,” Lewis said. “We were trying to work on a lot of things to make our team better. We just need to limit our errors and our overall attack.”

Sophomore LeMeita Smith said the team can use the games to improve.

“Sometimes we play teams that may not be at our level, and we just need to play our game and work on the little things.”

The Frogs will host North Texas at 7 p.m. tonight at the Rec Center before traveling this weekend to take on Utah and Brigham Young to start conference play.