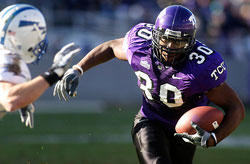 The Frogs victory against the Air Force Falcons gave them 10 wins for the second straight season and the fourth time in five seasons.TCU (10-2, 6-2) ended the season with seven straight victories; six came against Mountain West Conference opponents.

“We wanted to win seven in a row,” head coach Gary Patterson said. “We knew we had to do it one game at a time.”

Wide receiver Quentily Harmon said the team has shown a lot about themselves by the way they have played of late.

“A lot of people thought we were going to lay down and have won of those 5-6 seasons,” Harmon said. “But we didn’t allow that. We grew up and took responsibility.”

Senior quarterback Jeff Ballard completed all 12 of his pass attempts and accumulated 100 yards through the air in the first quarter.

“We just tried to nickel and dime them and take what they were going to give us,” Ballard said.

A 12-yard run by senior running back Lonta Hobbs put the Frogs on the board first. Ballard scored on a 1-yard run on the Frogs’ next possession to give TCU a 14-0 lead at the end of the first quarter.

“We wanted to jump out early,” Patterson said. “Fortunately for us it turned out okay.”

With the 14 points in the first quarter, the Frogs have outscored their opponents 70-10 in first quarters during their current winning streak.

“As an offense we are more confident in ourselves and each other,” Ballard said.

After an intentional grounding penalty to move the Frogs from the 3-yard line to the 14-yard line, Ballard threw a short pass to wide receiver Quentily Harmon. Harmon fought through, over and around tacklers before receiving a “lift” from center Blake Schlueter to propel him into the end zone.

“We moved the ball down the field and we were methodical,” Patterson said. “That’s what you have to do against an Air Force team.”

The next TCU possession led to a 38-yard field goal and a 24-0 lead at halftime.

The Frogs have outscored their opponents 176-13 in the first half of their current win streak.

“The last three games we are putting up offensive numbers I wish we could have put up all year,” Ballard said.

Air Force (4-8, 3-5) was forced to punt on their first drive of the half, but a batched snap gave the Frogs the ball on the Falcons 29-yard line to start their next drive.

A Hobbs fumble on the Falcon 1-yard line gave Air Force the ball on its own 8-yard line.

The Frogs would get their hands back on the ball when Torrey Stewart intercepted a pass and returned it 20 yards for a touchdown to give the Frogs a 31-0 lead.

The Falcons began moving the ball again, but a hit by safety David Roach in the backfield forced a fumble, which was recovered by defensive tackle James Vess. The recovery gave the Frogs the ball back on the Air Force 42-yard line.

A 38-yard pass from Ballard to sophomore running back Aaron Brown gave the Frogs the ball on the 1-yard line. Brown scored on an option the next play to give the Frogs a 38-0 lead.

Air Force would stop the Frogs’ shutout bid by returning a blocked punt for a touchdown. That made the score 38-7.

The Falcons would add another touchdown with 2:40 to play, but that is all they could muster, as the final score would be 38-14.

“I thought both teams would play hard for four quarter,” Patterson said.

Coming into this game the Falcons had the No. 3 rushing offense in the nation, but the Frogs were able to hold them to just 98 yards on the ground.

“One of our main goals was to stop the run,” linebacker Jason Phillips said. “

With this win the Frogs now look ahead to the San Diego County Credit Union Poinsettia Bowl, where they will face the University of Northern Illinois Huskies (7-5, 5-3).

“You got two teams that play the same way,” Patterson said. “They are hard-nosed. They are exciting. You got name players on both sides

The key player for the Huskies is their running back Garrett Wolfe. Wolfe leads the nation in rushing yards with 1,900.

“Everybody wants to watch him,” Patterson said. “He was a guy everyone was talking about as far as in the Heisman running.”

Phillips said he looks forward to playing against Wolfe and the rest of the Huskies.

“That’s a big test for our defense,” Phillips said. “If we can shut him down we can play with a lot of people.