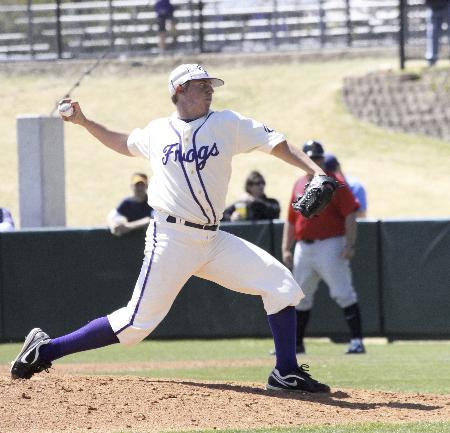 Frogs' junior right fielder Brance Rivera is in the midst of a 23-game hit streak as the Frogs are set to play game five of a 13-game homestand against Stephen F. Austin at 6:30 p.m. Wednesday.

Rivera, who is hitting .427, said the only streak that really matters is marked in the win column and that he hopes that after the last couple of games the Frogs can find their stride and win 10 or 12 in a row.

"I try not think about [the hit streak], but I know it's there," Rivera said after Sunday's 9-1 win over Houston. "Our last couple games we are playing more TCU baseball, hitters are hitting great, pitchers are pitching great. We're playing the type of baseball we know we can play."

After the Frogs allowed 17 runs in the first two games of their weekend series against the Cougars, senior pitcher Steven Maxwell set the pitching tone Sunday and the freshman duo of Stefan Crichton and Andrew Mitchell finished the game for Maxwell.

TCU (15-8, 2-1 MWC) ended a streak of 86 straight victories when leading after eight innings Friday. The Frogs gave up six runs in the ninth inning against Houston to blow the game 7-6.

With sophomore Matt Purke (3-1, 1.17 ERA) on the mound for TCU Saturday, it seemed unlikely the Frogs would dig themselves in a hole early, but they found themselves down 9-2 after four innings as Purke allowed five runs, two earned, on four hits with five strikeouts.

A seven-run sixth inning catapulted TCU back into the game, and the Frogs defeated the Cougars 16-10.

On Sunday, a couple of Frogs' defensive plays in the outfield kept the game out of reach for Houston. Junior center fielder Aaron Schultz's diving catch while running straight back toward the center field wall caught the attention of the remaining fans who didn't run for cover during a fourth inning rain shower.

"I got down two strikes and just started to battle him," Schultz said. "He left a changeup right there, I put a good swing on it and it went over the fence. It felt good."

Schlossnagle said he hasn't had a problem with how the offense has been hitting this season, and it seems the Frogs' offense has turned a corner after scoring 31 runs over the weekend.

Schlossnagle said Frogs sophomore catcher/outfielder Josh Elander is currently day-to-day after receiving an injection to help stiffness in his back.

The Lumberjacks have won 15 of their last 17 games and lead the Southland Conference.

The Frogs will start a stretch of eight games in 10 days Friday when they start their second Mountain West Conference series of the season against Air Force at Lupton Stadium. The Frogs hold a 2-1 record in MWC play after taking two of three games at UNLV in their MWC series opener March 18-20.