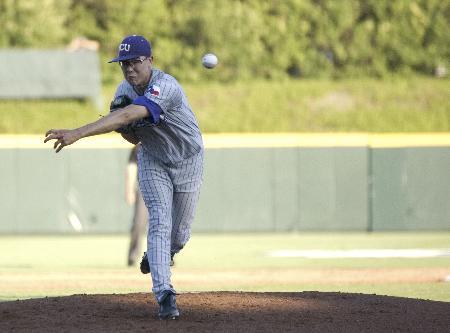 TCU freshman pitcher Matt Purke (13-0) didn’t exactly prove why the Texas Rangers wished they could have forked over a few more dimes and nickels to sign the lefty in 2009, but he showed he wouldn’t wilt in the 97 degree Texas heat with a nine strike out performance in an 11-5 TCU (48-11) victory over the Arizona Wildcats (34-23).

“I just took a deep breath and figured that they eventually have to get in the (batters) box and I kept focused on making my pitches,” Purke said. “I may have been a little nervous going into (the regional), but I took all the energy out of the stadium and the dug out and focused on putting in to each pitch.”

Catcher Bryan Holaday said Purke has always been the same guy all year.

“The atmosphere didn’t seem to bother him at all, and that was really impressive,” Holaday said. “He had great composure on the mound all night.”

“I just support my teammates,” Wiek said. “When I get a chance to come in and play I want to prove myself and let everyone know the type of player I am.”

Head baseball coach Jim Schlossnagle said Wiek will be in the lineup Sunday.

Curry walked to load the bases up, and Weik blooped a ball just over second baseman Rafael Valenzuela to put TCU up 1-0 in the first inning.

The Wildcats’ capitalized on a TCU error during the bottom of the second as designated hitter Josh Garcia scored from third to even the game 1-1.

Featherston answered with a three RBI blast blasted over the left field fence to put TCU up 4-1 in a crucial third inning.

Purke gave an emphatic fist pump after a quick third inning, striking out Wildcats’ short stop Alex Mejia for the final out of the inning.

Weik made Simon pay for a nine-pitch at-bat, as he knocked a two-run homer to put the Frogs up 6-1in the fourth inning.

Both teams were warned the next at bat after Simon threw a pitch behind Featherston. Simon heard the boos reign in from the crowd after being replaced by Wildcats’ right-hand pitcher Nick Cunningham with two outs in the fourth.

“I don’t understand why we have to warn people, because if you feel like (the pitch) was thrown with intent, you can immediately eject somebody,” Schlossnagle said. “I don’t know whether that (pitch) was done on purpose or not, only they do, but that’s not the brand of baseball we play and I was disappointed.”

Arizona proved to the Lupton Stadium crowd of 3,160 that they wouldn’t be completely dominated by Purke, as the Wildcats cut the lead to 6-2 after Garcia hit a solo home run in the fifth.

Wildcats’ first baseman Cole Frenzel drove in a run for Arizona to half the Frogs’ lead to 6-3 at the end of fifth inning.

Arizona pitcher Stephen Manthei replaced Cunningham in the seventh with one out and TCU runners on first and second.

Coats teed a base hit RBI just out of reach of Arizona’s Frenzel, and a Wildcats’ throwing error let the runners advance. A Manthei wild pitch scored another Frogs’ run, bringing the lead to 8-3.

Frogs’ pitcher Tyler Lockwood replaced Purke with one out in the seventh inning. With the bases loaded, Wildcats’ center fielder Joey Rickard grounded an RBI single to cut the Frogs’ lead to 8-4.

Arizona third baseman Seth Mejias-Brean hit a sacrifice fly to right field in the eighth inning to move the Wildcats’ within reach, 8-5.

Weike hit his second home run of the night in the ninth inning, clearing the bases to pad TCU’s lead to 11-5.

“The scouting reports might be a little different, but they play the same type of ball,” Holaday said. “They like to force some pressure, but that will feed to our advantage because we handle those situations really well.”

“I have a lot of respect for Coach Windegger, but my goal is to be the first coach to take TCU to Omaha and win a national championship,” Schlossnagle said.

This was the second time Purke had pitched at Lupton Stadium as the visiting pitcher-Purke pitched six innings of relief May 14, 2010 in a Frogs’ win against Air Force to complete a previously suspended game.

“It’s a little weird, we had to sit on the other side and warm up in a different spot,” Purke said. “We can do it either way.”

Tampa Bay Rays pitched David Price was in attendance to watch the TCU-Arizona game. The Texas Rangers are hosting the Rays for a three-game series in Arlington this weekend.

Baylor and Arizona will square off 2 p.m. Sunday-the winner will play TCU at 7 p.m.

Holaday on playing at night instead of the day: “It’s a huge of advantage getting out of the heat and being able to rest during the day. I don’t think it would be a problem for us playing during the day, however.”