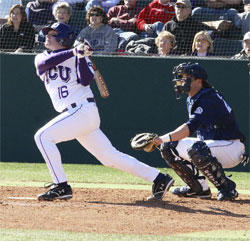 The Frogs took advantage of timely mistakes to defeat the Vermont Catamounts Saturday afternoon.Vermont (0-2) committed three errors in the bottom of the eighth inning to lead to the Frogs (9-4) 4-1 victory.

Before the eighth inning the Frogs and the Catamounts were tied at one in a pitcher’s duel.

The Frogs put the first run on the board in the bottom of the second inning.

Junior catcher Andrew Walker led off the inning with a four pitch-walk then stole second on the first pitch of sophomore second baseman Corey Steglich’s at bat. Steglich grounded out to second to move Walker to third base, then another ground out to second by junior designated hitter Steve Ellington scored Walker.

The Frogs had a chance to add to that 1-0 lead in that same inning.

A single by sophomore first baseman Matt Vern and a double by junior left fielder Clint Arnold put runners on second and third with two outs. Bryan Kervin would ground out to second to end the inning for the Frogs with no more damage done to Vermont.

The Frogs left five runners on base in the first three innings and head coach Jim Schlossnagle said the team didn’t take advantage of the opportunity to put the game away early.

“I thought we had some good at bats early in the game,” Schlossnagle said. “We had six hits through three innings, but we couldn’t get one to fall with runners on base. Then their pitcher fell into a rhythm.”

“We struggled with runners on to get the job done early on,” said senior thirdbaseman Steven Trout, who went 4-5 on the day.

The Catamounts tied the game in the top of the fourth inning.

After a lead-off single and a stolen base by junior thirdbaseman Kyle Massie, junior firstbaseman Kyle Henry drilled a deep double to center field to score Massie and tie the game at one.

The fourth inning was the only one that Frogs starter Seth Garrison, a junior, allowed two hits. Garrison struck out nine batters in five and 2-3 innings pitched.

With the score still tied at one in the top of the eighth inning Schlossnagle went to junior pitcher Sam Demel to keep the game tied.

Demel struck out two of the four batters he faced in the eighth.

“My fastball was working and my slider was working,” Demel, who earned his second victory of the season Saturday, said. “I mixed it up well and kept them off-balanced.”

In the bottom of the eighth inning the Catamounts defense, which had committed no errors so far, fell apart having three in one inning.

The biggest error came with runners on first and second base and Kervin at the plate. Kervin hit what appeared to be a routine fly ball to left field. The fielder misjudged the ball and it landed behind him. Both runners scored on the error and the Frogs had a 3-1 lead.

“We took advantage of the big error in left field,” Schlossnagle said.

Kervin scored when the next batter, Trout, hit a single up the middle.

The Frogs will try and complete the three-game sweep of the Catamounts Sunday at 1 p.m.

“They will come out tomorrow with a lot of energy,” said Trout, who leads the team with 16 RBIs, about trying to sweep Vermont. “Nobody wants to get swept on the road.