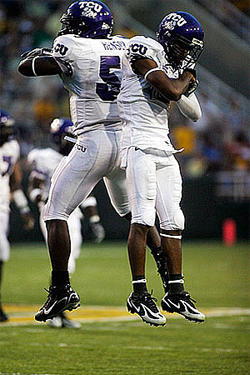 In front of a crowd of 42,733, the TCU Horned Frogs proved just how important conditioning is Sunday with a win over the Baylor Bears 17-7.The Frogs spent the summer practicing through the heat of the afternoon readying themselves for what they knew would be a tough game, head coach Gary Patterson said.

“It paid off.” said Herbert Taylor, senior left tackle. “Those guys were dropping, and we kept going.”

The first half was less than stellar with the Frogs falling behind in the second quarter following a 21-yard touchdown pass from Bears quarterback Shawn Bell to wide receiver Mikail Baker.

TCU headed into the locker room down by seven and having had just one scoring chance, a missed 54-yard field goal attempt by senior kicker Peter Lococo.

The Frogs started the second half strong with a 69-yard kickoff return by junior wide receiver Donald Massey.

They had a newfound drive to finish their chances and get the win, said Aaron Brown, sophomore tailback.

“They are a good football team,” Brown said. “I give them credit. They fought well, but the second half we had to get it done.”

The Frogs also started the second half without veteran senior quarterback Jeff Ballard, who was replaced by redshirted freshman Marcus Jackson.

“Jeff kind of got bounced around, and he wasn’t ready to go,” Patterson said.

With two quarters left, the Frogs settled on a field goal by junior kicker Chris Manfredini.

Two drives later, with the Bears suffering from fatigue, the Frogs got one in the endzone off an 84-yard pass from Jackson to Brown.

“We took some chances coming in,” Patterson said. “So we took a chance on a vertical route. We completed, went for a touchdown, and that’s what Aaron Brown is. He’s a fast guy, and he outran one of the best players on Baylor’s team.

Aaron Brown said he was excited about being used more directly in TCU’s passing game.

“We worked on that play all week,” Brown said. “Coach knew that we had it coming. I knew I had to beat him, and me and MJ hooked up. He knew where I was going, and I knew where he going.”

With five minutes left in the fourth quarter, the Frogs found themselves once again in the endzone following a 3-yard pass from Jackson to junior tight end Quinton Cunigan.

For the second year in a row, the Frogs have had success with a second-string quarterback coming in to replace their starter.

“(Marcus Jackson) came in during the offseason, during the fall camp,” Taylor said. “We’ve been preparing him to having to come in and make a play. He came in and did his job.”

Patterson said he enjoyed playing against such a strong team and predicted a successful future for the Bears.

“They are really good on defense here.” Patterson said. “They have got good coaches, good players, and they are going to keep getting better.”

With the University of California at Davis next week, Patterson said he is not going to let his team get over confident with this win.

“That’s exactly what happened last year with Oklahoma and then came SMU,” Patterson said. “All we care about is UC Davis.