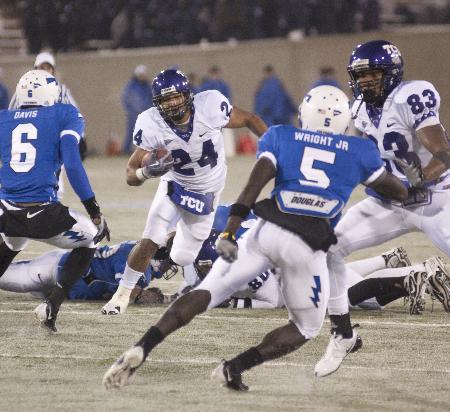 The No. 8 ranked Horned Frog football team will continue its quest to bust the BCS on Saturday when the Colorado State Rams come to Fort Worth.

TCU is 5-0, its best start since 2003, and coming off a 20-17 win in below-freezing temperatures at the Air Force Academy last Saturday. Colorado State started the season 3-0, but has dropped three straight games, including Saturday’s 24-17 loss to Utah.

In his weekly press conference on Tuesday, head coach Gary Patterson said the Colorado State offense will pose a threat to the Frogs because the Rams do a good job beating defenses deep down the field.

“We will have to stop the run, but also keep enough (players) back so we can help double-cover guys running vertical routes,” Patterson said. “That makes for a tough match-up.”

The Rams’ offense features two receivers with more than 300 yards through the air. Senior Rashaun Greer has 22 catches for 436 yards and fellow senior Dion Morton has 17 receptions for 344 yards and four touchdowns.

On the ground, junior running back Leonard Mason leads the Rams with 493 yards on 100 carries. Head coach Steve Fairchild said the TCU defense could create a tough match-up.

“They are fast and have great team speed,” Fairchild said. “They know their scheme and get lined up right and know their technique and assignments almost perfectly every time.”

The Horned Frog defense that Fairchild talked about is led by defensive end Jerry Hughes. Hughes has made seven and a half tackles for a loss, six sacks and 27 total tackles this season.

“(Hughes) is certainly a talented young man, so we will have to know where he is and be cognizant of the down and distance,” Fairchild said.

Offensively for TCU, senior running back Joseph Turner and junior quarterback Andy Dalton have each accounted for six touchdowns. Turner has carried the ball 69 times for 376 yards and Dalton has completed 78 of 119 passes for 1012 yards.

Since Saturday’s game is the first home game in Mountain West Conference play, Patterson said it would present a new set of challenges.

“Once you get into conference play, everyone has seen what you do and how you do it,” he said. “You can fool (opponents) once, but after you have played them you aren’t going to be able to fool good coaches again.”

Last season TCU beat CSU 13-7 in Fort Collins, Colorado. The Horned Frogs have won five of their six meetings with the Rams, including the past five meetings.

CSU’s lone win in the all-time series came in 1998 when both schools belonged to the Western Athletic Conference.