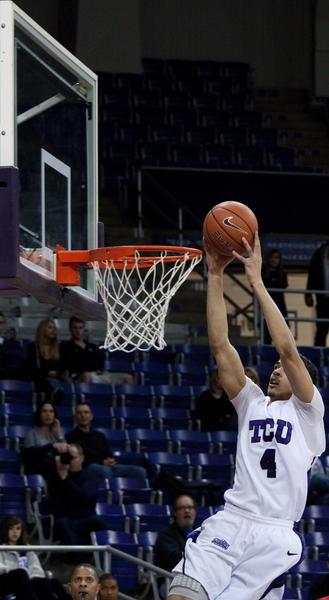 Hank Thorns scored 18 points and Nikola Cerina added 14, but it was not enough to prevent the TCU men’s basketball team from losing to Utah 75-62 Saturday evening at the Daniel Meyer Coliseum.

The loss was TCU’s second in a row, dropping them to last place in the Mountain West standings. The Frogs now have a 10-11 regular season record and a 1-5 conference record.

Defeating the Frogs gave Utah its third straight win and evened their record to 10-10 on the season and 3-3 in conference play.

The Utes shot 62 percentfrom the field in the first half and were anchored defensively by their two seven-foot centers, David Foster and Jason Washburn.

Foster and Washburn stalled nearly everything TCU tried to do in the paint, causing the Frogs’ offense torely heavily on Thorns forthe first fifteen minutes of the game.

Thorns, a junior transfer from Virginia Tech, scored 16 of TCU’s first 24 points and assisted freshman Amric Fields on an alley-oop early in the game.

Leading scorer juniorRonnie Moss was held scoreless until 8:48 left in the first half when he drove into the lane and made a floater from about 10 feet out. Cerina, the team’s biggest inside presence, started the game 0-3 from the field before scoring five straight points in the final two minutes of the half.

Meanwhile, Utah began to light it up offensively. Junior guard Chris Kupets provided a spark off the bench, coming in and draining a three-pointer on his first possession and finishing with seven points for the half. The Utes’ leading scorer, Will Clyburn, was nearly perfect from the field, shooting 5 for 6 and leading Utah at the half with 12 points.

Utahreturned fromthe locker room and shot five for eight from the field the first five minutes of the half. The Utes made only one three-pointer in that span from sophomore Shawn Glover,butGlover’s shotextended the Utah lead to 10, its biggest of the evening.

That lead grew to 15 after Glover hit another three-pointer with 10:03 left in the game, but TCU still had one more run in them.

At around the six-minute mark, TCU came out of a timeout and got a quick layup from J.R. Cadot on a fastbreak. The Frog defense stopped Utah and got the ball to Garlon Green who made a three pointer to cut the lead to eight.

But just as quickly as TCU scored five points to get back in the game, Utah took the game out of reach again.

On their next possession, Ute guard Josh Watkins made a quick layup. Green was called for a violation on the inbound, andUtah was given the ball back. Watkinswas fouled and made both free throws, extending the Utes’lead to 12 and putting the game out of reach for good.

The loss left TCU head coach Jim Christian searching for a solution as the Frogs head into their final 10 games of the season.

“We’ve tried a lot of different things to try to get them to come together and play the way we want them to play with the pride and the toughness that we want,” Christian said.

Hesaid the team will have to work hard to finish the season off the way he had hoped they would going into the year.

“We have some guys that obviously have to do some soul searching as to how they want to do this and how bad they want this team to come together,” Christian said. “I think we had great potential with this basketball team. We’ve tried everything I know and we’ll continue to try everything we have to keep getting it out of them. It’s been disappointing and it’s definitely been frustrating.”

TCU will be in action again this Wednesday when they travel to Albuquerque to face the University of New Mexico. They game is scheduled to start at 9 p.m. central time and will be broadcast on the Mountain Network.