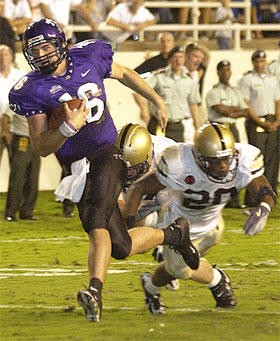 An angry Gary Patterson challenged his players at halftime of Saturday’s 38-17 win over Army.”I told them they should be embarrassed,” the head football coach said. “You’re not playing very hard or smart in any phase of the ball game.”

The Frogs held a 4-point lead at the half, but were held scoreless in the second quarter and had just allowed the winless Black Knights to drive twice into the red zone.

TCU, which had moved into the Associated Press poll at No. 25 earlier in the week, looked more like the team that lost to lowly SMU after last moving into the rankings than a team riding a four-game winning streak.

Patterson needed more from his team.

“The look in the coach’s eyes at halftime, it kind of motivated us even more,” senior cornerback Quincy Butler said. “He expected a lot more from us, and we came out in the second half and showed who we really were.”

Butler intercepted two passes after halftime to help the Frogs establish their identity.

“It wasn’t our best game first half,” Butler said. “The second half, we came alive. We played with a lot of intensity and a lot of aggression.”

The Frogs looked more inspired after the break, outgaining the Black Knights 152-50 in a 10-0 third quarter before junior quarterback Jeff Ballard sealed the game in the final period with two rushing touchdowns.

Ballard also threw for two touchdowns and completed 22 of 29 passes for 219 yards with one interception in the game.

“I took what they gave me, and I didn’t try to make the big play,” Ballard said. “That was the key to my success, and I guess the team’s as well – because I didn’t try to force things.”

Patterson said Ballard effectively managed the game and tailback Robert Merrill, who rushed 21 times for 85 yards and a touchdown and caught four passes for 40 yards, customarily paced the offense.

“Robert Merrill is Robert Merrill,” Patterson said. “He comes to play every week. Just a very quiet, 80-some yards-a-game kind of guy – unassuming, doesn’t need praise – he’s like a lot of other players we have on this football team.”

The Black Knights gained 362 yards of total offense, but failed to take full advantage of multiple opportunities inside the red zone. Army quarterback Zac Dahman passed for 252 yards, but threw three interceptions. Running back Carlton Jones added 66 yards and a touchdown on the ground.

Senior free safety Jeremy Modkins said the Frog defense came up big in defending a short field and forcing three turnovers, but the unit did not meet expectations on the whole.

“We didn’t perform up to our standards of TCU defense,” Modkins said. “We gave up too many yards rushing and too many yards passing, but I guess overall, we came up with the win.”

The win moved the Frogs up in the AP and into the USA Today rankings. TCU sits at No. 21 in both polls.

The 6-1 Frogs are the only team undefeated in Mountain West Conference play at 4-0 and hold a 1.5-game lead over Colorado State, the only team with one conference loss, for the top spot in the league. TCU will finish the season with four straight MWC games, starting Saturday at Air Force.

Patterson said a win is a win, but the Frogs were fortunate to escape the Army game because they played carelessly, committed too many penalties and made far too many mistakes.

“We won’t have the luxury in the next four weeks to play bad if we want to win the conference title,” Patterson said.