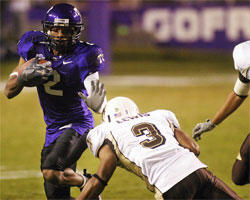 With a win over the Wyoming Cowboys on Saturday, the Horned Frogs are no longer at the bottom of the Mountain West Conference pack.Both the offense and the defense came together to take down the Cowboys 26-3. The Frogs are now 5-2 overall and 1-2 in conference play.

Head coach Gary Patterson attributed much of the win to the resurgence of the offense, which he said had been unable to back up the defense in the preceding weeks.

“This was probably the most complete game we’ve had as a team,” Patterson said. “Defensively, we really haven’t ever played that bad all year. You say we gave up 31 points to BYU, but, with a healthy John Beck, not very many people are holding him down.”

Senior quarterback Jeff Ballard and senior wide receiver Quentily Harmon appeared in synch as they connected for 105 yards of a total 244 passing yards on the game. Sophomore wide receiver Donald Massey also had a big play, catching a 77-yard post that nearly resulted in six points.

“We were in stride, and I was hitting the guys.” Patterson said. “It was a good comeback game for the offense. Against Army, the offense gained some confidence and this game too.”

The Cowboys came into the game as the nation’s No. 1 passing defense, but Harmon said that fact was less intimidating than one might think.

“To me and to this team, it was motivation,” Harmon said. “Coach Patterson put it in our faces all weeklong about how we had the No. 1 defense coming into town and how would we react to it.”

Senior tailback Lonta Hobbs re-emerged as a solid back for the Frogs to go alongside sophomore tailback Aaron Brown. Both backs had more than 65 rushing yards and combined for more than half of the Frogs’ total 204 rushing yards.

“I loved to see Lonta run,” Harmon said. “We came in at the same time, and today, we made it personal. This was our last homecoming. He ran so hard, and it made me proud. He did a great job of coming in off of his injuries and running the ball hard.”

The Frogs next go on the road to take on the UNLV Rebels in Las Vegas, a place in which Patterson said he knows not to underestimate the Rebels.

“No matter what the score is when they’re on the road, when they play at home, they’re a lot different,” Patterson said. “Last year, they beat San Diego State at home. We got a lot of work to do.”

The Frogs have five conference games left in the season, and with a three-game in-conference deficit behind the BYU Cougars, they will need to win out and hope for some luck in order to have a chance at taking the Mountain West Conference championship for the second year in a row.