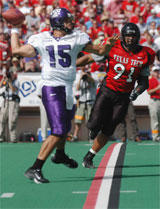 After a day off Wednesday, the Horned Frog football team will return to the practice field to prepare for the season opener against Oklahoma in Norman on Sept. 3.”We’ve progressed,” said head football coach Gary Patterson. “I don’t know if you’re ever ready for an Oklahoma, but we’ve done a good job in preparing our kids.

“The biggest thing is that we will find out on the 3rd.”

Patterson said the No. 5-ranked Sooners are a tough team to beat on their home field.

The Sooners’ returning running back, sophomore Adrian Peterson, was the sixth leading rusher in the nation and averaged a little more than 148 yards a game last season.

At practice Tuesday, the Frogs did various timed drills on offense, defense and special teams while dressed in half-pads in the 100-plus-degree heat.

Senior starting quarterback Tye Gunn, who has been hindered by injuries throughout his career, appears to be 100 percent healthy, Patterson said.

“Right now, he went through spring and didn’t have any problems and hasn’t had any problems in the fall, so he’s been perfect,” Patterson said.

One of the targets to whom Gunn will be throwing this season is junior starting wide receiver Cory Rodgers.

The receiver ended last season with 61 catches for 836 yards and seven touchdowns. Rodgers was also third-team all-Conference USA as a wide receiver and kick returner.

Rodgers said Gunn’s precision is on the money and he is on the same page as Gunn while on the field.

“As far as us coming along from last year, we’ve improved tremendously, as far as team chemistry and knowing our plays and assignments,” Rodgers said.

TCU ranked 18th in total offense and 16th in scoring offense in the nation last season.

On the defensive side of the ball, the Frogs look to improve their 99th ranking in team defense from last season.

“We’re competing better, and when it gets hotter, we turn up the knob a little,” Coleman said. “We have a lot more experience and depth than we had last year.”

Butler said Patterson emphasizes keeping focus in practice to prepare for the start of the season.

Patterson said the Frogs are trying to develop their second and third teams to back up the starters.

Patterson also said he will play a variety of different players on the defensive side of the ball against Oklahoma.