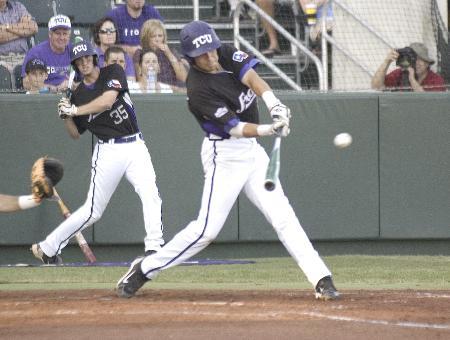 The No. 5 seeded Horned Frogs (47-11) defeated the Lamar Cardinals (35-25) 16-3 in the opening game of the NCAA regional tournament at Lupton Stadium Friday night.

The Cardinals opened the first inning against the Frogs with a run, which had a strong response by the Frog offense. The productive first inning led the Horned Frogs 3-1 over Lamar. Sophomore Brance Rivera opened for the frogs by advancing to second base by a fielding error. Senior Bryan Holaday was hit by Lamar starting pitcher Matison Smith. Sophomore Jason Coats gained a single, leading Rivera to an unearned run in the first.

Horned Frog pitcher Kyle Winkler held Lamar five out of the six innings pitched, allowing only one earned run by Lamar. Sophomore Winkler struck out six hitters and submitted one walk against the Cardinals.

A solo home run by Junior Joe Weik in the third inning put the frogs 4-1 over Lamar. Weik finished the night with two runs.

Josh Elander scored the last hit for the Frogs at the bottom of the eighth inning after hitting a double to center field.

TCU’s 16-3 win against Lamar was the Horned Frogs 25th time to earn ten or more runs in a game this season.

The Horned Frogs will continue its run in the Fort Worth Regional Tournament Sat. night at 7 p.m. against the Arizona Wildcats. Arizona defeated Baylor 10-1 in the first game of the tournament Friday afternoon.