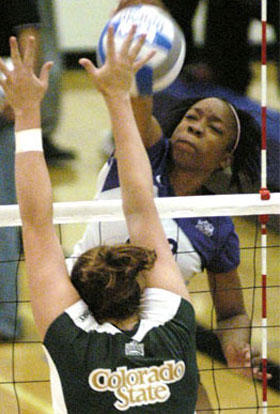 TCU volleyball dropped its first two games, but rallied Tuesday night to defeat the Colorado State Rams (24-30, 23-30, 30-28, 30-26, 15-10) at the University Recreation Center. Associate head coach Jason Tanaka said the team did a good job of working together and carrying out a solid strategy.

“We focused on self and had a good game plan that we were able to execute,” Tanaka said. “We executed the job by coming together and focusing.”

“She did an incredible job toward the end,” Tanaka said.

Whitfield finished the match with 14 kills and 16 digs.

Whitfield said that the team showed a lot of tenacity in defeating the Rams, who came into the game in second place with a 5-2 record in the Mountain West Conference.

“We were down two games,” Whitfield said, “The talking and cheering from the team helped us come back from the earlier two game deficit.”

Nirelle Hampton, a freshman setter, said the team corrected its attitude and played good defense after a rough start.

“There were points where we lacked energy and enthusiasm,” Hampton said. “We blocked really well, and we continued to work on the consistency of our playing.”

Tanaka said the team has some areas that it needs to improve in the last half of the conference schedule, which begins Saturday at home against Brigham Young.

“We didn’t serve well, but we were much more consistent at the end of the match,” Tanaka said.

Whitfield said the team will be able to build on its come from behind performance as it finishes out its schedule.

“We learned tonight anything is possible,” Whitfield said. “Anybody can come back on any given day to win.