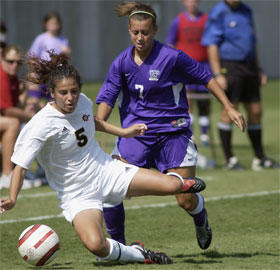 Despite coming off a 1-0 loss at New Mexico in the final regular season game, junior forward Angie Nickens said she’s optimistic about the Horned Frogs’ chances in the Mountain West Conference tournament.Seventh-seeded TCU will take on the No. 2 Nevada-Las Vegas Rebels, the tournament host, Wednesday night.

“I think we will be a lot calmer and relaxed in the tournament because we don’t have high expectations,” Nickens said. “We could come out and surprise a lot of people.”

UNLV finished its season at 10-6-3 for the year with a 5-2 record in conference, including a 1-0 win in TCU’s first MWC home game Oct. 14. Head coach Dan Abdalla said the team should be better having played all MWC teams this season.

“We’ve seen everyone now, and we know what to expect,” Abdalla said. “It’s down to single-game elimination now, so we’ll just go out there and see what happens.”

The single elimination setting means that every game will extend the team’s season or send them to the off-season.

Utah, the two-time defending tournament champions, went 13-5-1 for the season while going 6-0-1 in the conference.

This is the second time in three years that the Utes will go into the tournament with the No. 1 seed in the conference.

Freshman midfielder Sara Schneider said she believes that the team that plays the best on a game-to-game basis will succeed in the tournament.

“It’s about whoever wins the battle and fights it out in the game, not about the teams that are better,” Schneider said. “We’re a growing team, and we need to learn how to play together more consistently for an entire game instead of just one half.”

The MWC tournament will be played at UNLV’s Peter Johann Memorial field in Las Vegas.

The quarterfinals will begin Wednesday, the semifinals Thursday, and the two finalists will square off Saturday night for the MWC crown and an automatic bid to the 2005 NCAA Women’s College Cup.

Nickens said the team has to put the regular season behind them and focus on the tournament now.

“The season has been interesting, and we’ve had the opportunity to travel to some different places,” Nickens said. “We just have to put all of it behind us because the it’s time for the tournament to begin now.”

TCU’s game against the Rebels is scheduled to begin at 9 p.m.