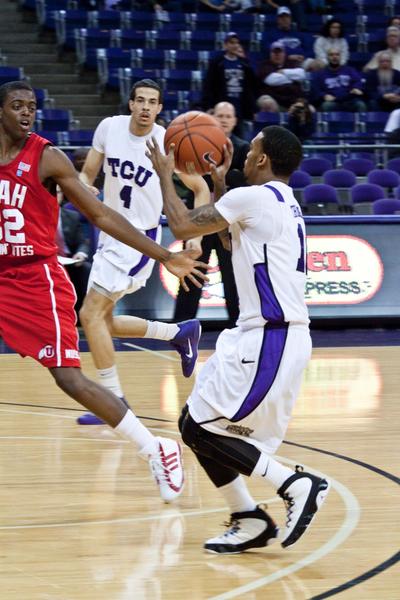 The Frogs return home to Daniel-Meyer Coliseum on Wednesday to face the University of Nevada-Las Vegas.

Although TCU has lost its last six games, the Frogs were able to play a close game against No. 6 San Diego State on Saturday. TCU came within five points with less than two minutes remaining in the game and only lost by seven on the road at SDSU, 60-53. UNLV is the only other team that has played the Aztecs in a tighter game this season.

Head coach Jim Christian said that even though the game resulted in a loss, the team walked away proud of the game it played.

“We walked away unhappy that we didn’t win but happy with how we approached it,” Christian said. “I think the guys know that in the last two weeks we’ve gotten better; we are trying to be the most improved team in the second half of the year and that was a big step towards that.”

Junior guard Hank Thorns led the Frogs with 16 points, and senior guard Greg Hill matched his season high with 12 points. TCU shot 39.6 percent in the game, including 31.6 percent from beyond the arc.

TCU is not only looking to build off of its current momentum but also to avenge its previous loss to the Rebels this season. The Frogs fell to UNLV 83-49 on Jan. 8. The game marked the Rebels’ highest margin of victory ever in conference play.

The Frogs struggled in their last matchup with the Rebels with a season-high of 23 turnovers. TCU also made only 16-of-51 field goal attempts in that game, while the Rebels shot 50.8 percent from the floor.

Christian said he hoped the Frogs could prove themselves and play a stronger game against UNLV this time around. The Frogs defense has greatly improved, something that was evident against SDSU when the Frogs held the Aztecs to only 60 points, he said.

“We’ve had really good practices,” Christian said. “We’ve came together, and for the first time I really feel like we are building on solid ground and trying to improve, really trying to get better.”

Christian said he was confident the Frogs were getting back on track and that he was ready for the team to dominate the second half of the season, starting with UNLV.

“For us we are looking forward to the second half of the season,” he said. “You know the last two nights we’ve played we’ve gotten better. We haven’t, unfortunately, won, but we’ve put ourselves in position both games, and that’s improving our team and we are excited to move forward.”