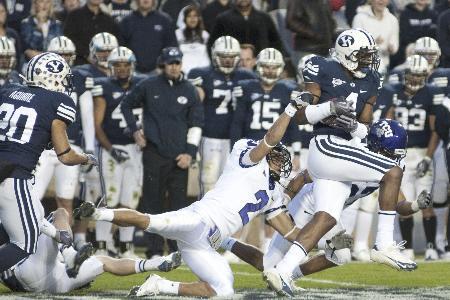 The Frog’s BCS bubble stayed intact and well protected after a 38-7 drumming of the BYU Cougars Saturday.

“I don’t think anyone would have predicted this and that’s why I told the players to enjoy the moment,” Frog head coach Gary Patterson said.

TCU Quarterback Andy Dalton passed for 241 yards, going 13 for 24 on the night. With the win tonight, he gained sole possession of second place in TCU’s all-time win leaders for quarterback at 24-6. He trails only Sam Baugh who went 29-7 in his career at TCU.

“Andy Dalton doesn’t get as much credit as he deserves. He just doesn’t do it in a wow fashion.”

“The back seven did an awesome job getting (Hall) to go through his reads and allowed us to get time to go back there,” defensive end Jerry Hughes said.

The highlight of the game came on a 44 yard pass by Jeremy Kerley to Bart Johnson. Kerley got the ball on a reverse from Ryan Christian and appeared like he was going to be tackled in the backfield until he fired a long pass to a wide open Johnson near the sideline. When asked what he called the play, Patterson said, “Prayer.”

“It’s a play I made the offense put in because it’s a Boise State play,” Patterson said. “I had to work on it so much getting ready for Boise for the bowl game I said look we’re going to put this play in because I want to be able to practice against it.”

The Frogs opened up the scoring, and never looked back, on a four yard touchdown run from Joseph Turuner. This run extended his team high touchdown count to eight and moves him to fifth on the TCU all-time list with 26. Turner would finish second in rushing yards with 36 behind Matthew Tucker with 42.

TCU would score again late in the first on a 28 yard pass to Ed Wesley on a wheel route around the right side. Wesley would finish with 56 total yards spread evenly at 28 between rushing and receiving.

The scoring continued in the third as Jimmy Young scored a 12 yard touchdown off the pass from Dalton. Dalton threw the fade to the back right pylon of the end zone and Young just grazed his toe inside the stripe after cradling the catch. Young finished as the leading receiver for the Frogs with 44 yards on 4 catches.

BYU would finally get on the board right before the half on a three yard pass to Harvey Unga from Hall. The Frogs stopped the Cougar run three times inside the five but BYU converted on fourth for the score. Hall went 18 for 28 on the night for 162 yards.

BYU finally held TCU to only a field goal while in the red zone as TCU kicker Ross Evans nailed a 28 yarder to add three to the Frogs score in the third.

Dalton would later air one out to Antoine Hicks over the BYU secondary which would be taken in for a 75 yard touchdown. This play marked the longest play from scrimmage for the Frogs this season and is the longest since Marcus Jackson’s 79-yard run against SMU in 2008. The next longest pass play was in 2006 when former TCU quarterback Jeff Ballard connected with Donald Massy for 77 yards against Wyoming.

“That was a big play for us. The offensive line did a great job. We ran a little stutter on the corner and he bit on it and Antoine got behind him and I just put it out there to let him go make the play.”

The Frogs finished their onslaught in the fourth with a seven yard run from the leading rusher Tucker.

Patterson said he was happy with his players and the win but is weary of getting to excited as not to fall like they did in 2005 to SMU.

End of the third: TCU 31, BYU 7 – TCU unleashed it’s longest play from scrimmage since the Marcus Jackson run last season at SMU in the 75-yard pass play from Dalton to Hicks. TCU starts with the ball to begin the fourth.

9:35 remaining: TCU 24, BYU 7 – TCU kicker Ross Evans hits a 28-yard field goal to add three to the scoreboard. The Frogs moved the ball down field well, but were rescued from having to punt by a roughing the passer penalty. They were stopped three times and forced to kick the field goal.

End of the second: TCU 21, BYU 7 – The Frog’s dominated the first half of play scoring three times in the first half. The Cougars however, found a spark with under two minutes left in the half and marched down the field fairly uncontested to score with around a minute left. BYU held the Frogs to a three and out to end the half.

1:42 remaining: TCU 21, BYU 7 – BYU scored on a 3-yard pass play to Harvey Unga on the wheel route who ran it in for six. BYU had no trouble marching down the field passing on a quick drive before the end of the half. PAT good by Mitch Payne.

5:03 remaining: TCU 21, BYU 0 – Dalton connected with Jimmy Young on a fade to the back pylon for the touchdown. The play was reviewed but the ruling on the field of a touchdown stood after seeing Young just drag his toe inside the line. PAT good by Evans.

End of the first: TCU 14, BYU 0 – After being forced to punt on their first drive, the Frogs were moving the ball with ease down the field through the air. The biggest play of the first came on a reverse pass which involved Jeremy Kerley throwing a deep pass off the hand off to Bart Johnson. BYU will start with the ball in the second.

2:27 remaining: TCU 14, BYU 0 – Ed Wesley caught a 28-yard touchdown pass, broke a tackle and jumped inside the pylon for the score. The play was reviewed but the ruling on the field stood. PAT good by Ross Evans.

6:16 remaining: TCU 7, BYU 0 – Joseph Turner ran in for the touchdown from the BYU for the first score of the game. TCU moved the ball down the field with the pass with big receptions from Bart Johnson, Jeremy Kerley and Jimmy Young.