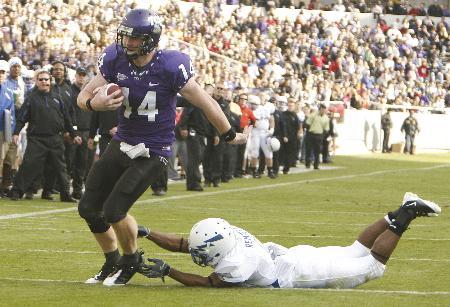 Head coach Gary Patterson said he misses all his seniors, but the 22 men who played their final game in Amon Carter Stadium Saturday afternoon may be missed more than most.

“I miss them all, but there are levels of groups you miss,” Patterson said. “If you could’ve just been in the locker room at Utah, you’d understand.”

The seniors left their mark Saturday by tying the 1932-35 Horned Frogs for the most wins in their four years with the program, getting their 40th victory in the 44-10 defeat of the Air Force Academy. Patterson is now 72-27 as the head coach of the Horned Frogs, and he pointed out that the seniors contributed to the majority of those wins.

Prior to kickoff, the seniors were greeted with a hug from Patterson before being honored with friends and family for their tenure with the team.

The Falcons weren’t greeted nearly as warmly when the Frogs took the opening kickoff and scored 2:22 seconds later on a three-yard run by redshirt freshman fullback Luke Shivers.

“It seemed like everything was working on that first drive,” sophomore quarterback Andy Dalton said. “It set the tone, and we just went off from there.”

The Frogs and the nation’s best run defense were poor hosts to the Falcons’ triple option rushing attack as well, holding them to 150 yards on 37 attempts.

The Falcons entered the game No. 4 in the nation in rushing yards per game with 279.7.

“We had two weeks to prepare,” Patterson said. “We got something going and we played like we wanted to win 10 ball games.”

In the first half, the Falcons generated 54 yards rushing on 20 carries, including a 54-yard run by Asher Clark. The Falcons only touchdown came on a 57-yard run up the middle by Jared Tew early in the fourth quarter.

“Sixty-six plays and we only messed up twice,” senior linebacker Jason Phillips said.

The two runs counted for 111 yards of the 150. The Falcons managed only 39 yards on their other 35 carries.

Other than the Tew run, the interior of the defense limited the yardage on runs up the middle in the triple option offense, which Phillips called a tough offense to stop.

“The inside of the defense played extremely disciplined, extremely fast and extremely well,” Phillips said.

The play of senior defensive tackle Cody Moore and senior nose tackle James Vess helped the linebackers and secondary to cover the option outside by forcing the offensive line to double team the tackles.

“If we stuff it up the middle and don’t let them hand off that dive in the belly, I think we let those safeties run around back there. I think they can stop a lot of things,” Moore said.

Phillips said the long breaks between games have their ups and downs. The Frogs hadn’t played in 16 days.

“It gives us time to get prepared and to get healthy, but it also takes you away from the game for a while,” Phillips said.

The Horned Frog offense flexed its muscles as well. The 44 points and six touchdowns gave the 2008 team the single-season record for points scored (420) and touchdowns (54).

“It shows the potential we have here on offense,” Dalton said.

On their fourth possession, the Frogs showed how they lead the nation in time of possession, taking 5:57 off the clock on 11 plays. Dalton capped the drive with an eight-yard run around the right end to put the Frogs up 17-3.

Then Dalton and company showed they didn’t need to take all that time off the clock.

After using a pair of timeouts following the Falcons second and third down plays, the Frogs got the ball back with 2:40 left in the half at their own 45. But they’d only need 1:55 to get in the end zone.

Dalton hit a wide open Young on the sideline to beat the Falcon’s zone coverage for 23 yards on first down. Young had five catches and 100 yards on the day. It was his fourth 100-yard performance of the season.

After a sack, Dalton found junior wide reserver Ryan Christian over the middle for 17 yards. Sophomore wide receiver Bart Johnson snagged a Dalton pass at the goal line for a 22-yard touchdown pass, pushing the lead to 24-3 at the half.

Dalton went 21-for-27 through the air with a pair of touchdowns. He added two rushing touchdowns on 66 yards as well.

“We prepared well,” Dalton said. “I just got some good work all week, the past two weeks, of what they were doing and studying film. So I was able to see all the stuff they were doing. We just went out there and executed.”

Patterson said the two weeks to study the Falcons contributed to the Frogs’ big plays on offense throughout the game.