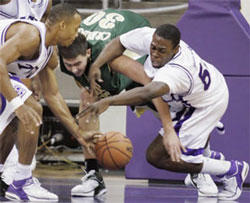 It would probably come as no surprise to anyone if senior guard Nile Murry went to bed singing the old Dusty Springfeild song that went, “Mama said there’ll be days like this, there’ll be days like this, my mama said.”The TCU Horned Frogs (5-19, 1-9) set a new dubious team record Saturday by shooting just 21 percent from the field on 13 for 62 shooting in a 43-35 loss to New Mexico (15-9, 6-5). The Frogs were just 1 for 23 from the field in the first half before senior forward Judson Stubbs got it going by hitting a three-pointer with just three minutes remaining.

Head Coach Neil Dougherty said Stubbs was one of the lone bright spots from the game tonight for the Frogs.

“That’s the best game Stubbs has played in a while,” Dougherty said. “He rebounded the ball really well, including five offensive rebounds.”

Stubbs scored seven of TCU’s final ten points of the first half, en route to a 14 point and 10 rebound night. Stubbs said he attributes his good game to finally getting through a mental block he was having.

“Mentally I was just going through a little faze,” Stubbs said. “I’m over it now. I just had to get in the gym and keep shooting my shots.”

That is exactly what Dougherty said he told his team at halftime to do.

“I just stressed to them to keep shooting and playing hard and if they did that eventually something would fall,” Dougherty said. “It actually did start to happen at the end of the first half, too.”

The surprising part of this game, besides the wide open shots missed by TCU, was that they were still in the game up until the very end. Dougherty said it was the teams’ intensity that kept them in the game.

“Usually when a team goes through scoring droughts like we did tonight, they are blown out and have a lot of turnovers in the game,” Dougherty said. “That wasn’t the case tonight. We didn’t lose because of lack of effort. We played hard. We just missed a lot of shots tonight.”

A substantial portion of the missed shots came from the Frogs’ starting backcourt of Murry and sophomore point guard Brent Hackett. The two combined to shoot 4 for 19 from behind the arc and 6 for 32 overall.

“It was frustrating to see them going down and hitting contested shots, and then to have us come right back and miss wide open looks,” Murry said. “Every shot I took tonight felt good. But that is the game of basketball. I could come out next game and shoot 10 for 10 or even 20 for 20.”

Dougherty said there were times during the game when he felt almost helpless on the bench.

“It was just one of those kinds of games,” Dougherty said. “I was just sitting there thinking to myself ‘What else can I do to help us win?'”

Murry said the team will not allow its frustration from this game to carry over.

“We can get through this because we’ve probably had to overcome games like this more than any other team in the nation up to this point,” Murry said. “We’re going to bounce back from it.