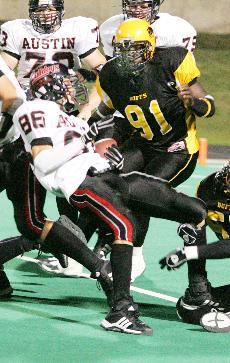 The Horned Frogs signed 15 players on Wednesday, 10 offensive, four defensive and one kicker.

He said he does not think TCU’s signing class will rank in the top five in the Mountain West Conference and probably will only be ranked as average in Texas, but he said it would have little to do with talent and more to do with the number of players signed.

“We’re never a group that’s up there because I think you have to have numbers to get up there,” Patterson said. “Usually in the state we get a C. Five years later we always seem to move up in that category.”

Out of TCU’s 15 signed players, 13 are graduating from high school and two are transfers from junior colleges.

Also, four of the players are from out of state, something Patterson said he does not usually aim for.

“This is kind of an uncommon year,” Patterson said. “We’d like to stay 99 percent of the time in the state of Texas.”

The out-of-state recruiting just happened to work well with the team’s needs, he said.

TCU signed four offensive linemen, the most of any position.

Patterson said he has an older group of offensive linemen with junior and senior class players, and it was necessary to over-sign the offensive lineman position to keep the numbers right.

He said the linemen are talented enough to be able to contend with the older players and should provide competition in practice.

Another position Patterson said the team put an emphasis on was wide receiver, which TCU signed two of, as well as two tight ends.

The big grab from the receiver position is Marques Parker, a junior college transfer from North Iowa Area Community College.

Patterson said Parker is the type of wide receiver who can scare teams with the ball in his hands, but he also scared some of the major conference schools early because of his grades.

“A lot of the middle of the Big 12 came in and offered him late in the process once they knew he was going to be OK academically,” Patterson said.

One surprise recruit for TCU is placekicker Ross Evans from Burnet.

Patterson said he usually does not recruit kickers, let alone talk about them, but he is really exited about Evans.

Evans changes the whole complexion of how the team thinks on offense, Patterson said. He gives the Frogs the opportunity to win from 50 yards out at the end of games, he said.

Quarterbacks of the Future

The Frogs’ other offensive recruits were at the running back and quarterback positions.

Team’s usually have about five quarterbacks, but he made the decision to wait on next year’s crop to sign more.

“We could have possibly signed two quarterbacks in this class, but there’s a tremendous class of junior quarterbacks coming up,” Patterson said. “We wanted to get ourselves in position to be able to get one of those guys.”

As for the defensive recruits, TCU took one from each position, a defensive tackle, a linebacker, a cornerback and a safety.

Patterson said his linebacker recruit, Greg Burks from Houston, could be the most athletically gifted player in Texas and his cornerback, Edward Patterson from Bastrop, La., gives the team a big and physical player to cover wide receivers.

The Horned Frogs still have scholarships available, and Patterson said players are coming to TCU to look at the school.

He said he is not interested in players for any particular positions, just the most talented ones.