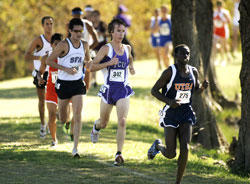 Clear blue skies, mid 50s temperatures, and eyes set on the finish line as hard winds gripped the runners’ faces in the NCAA Division I South Central Cross Country Regional competition.A day of personal bests and improvements rounded out a season of constant uphill climbs for the Horned Frogs.
Injuries to junior girls Cassie Hostick and Halie Bullin put a damper on the season, but the women’s team was able to move on and perform during the regional competition, Saturday said Eric Heins, head coach.

“Overall we performed much better as a team this year,” said sophomore Ashley Young.
Heins said the goal for the women’s team was to end the season on a good note.
Leading the women’s team through the whipping winds was Calandra Stewart who just missed an automatic qualification for the NCAA National Championships in Terre Haute, Indiana.

“The winds slowed down the team, but we ran a smart race,” Young said.
Stewart stayed among the top 10 runners in the 108 competitor field through the entire meet. During the final 50 meters of the race, Stewart could not seem to muster the energy for a final kick and was overtaken by Jodi Hulett from UT Arlington and Miranda Walker from the University of Arkansas.

Stewart still crossed the line in 10th place with a time of 20 minute 54.8 seconds for the 6K race. The event was won by Rachael Forish from Southern Methodist University.

“This year went better than last year,” Stewart said. “This year came down to the last 50 meters, but I hope and pray that I still make it to nationals.”

Her placement in the race put Stewart one place shy of an automatic bid, but she is still awaiting an at-large NCAA bid to qualify for the nationals. At-large bids to the nationals are decided by a committee of coaches and NCAA officials.

The women’s team finished in 8th place overall, just edged out by the University of Texas by one point.
“I felt we did a good job of following coach’s raceplan,” said freshman Carlene Mayfield. “We raced well inside ourselves.”

The men’s race followed a new format with a 10K race as compared to the traditional 8K run during conference competition.

Freshman Festus Kigen and junior Matt Manly led the Frogs through the course to a 9th place team finish.
Kigen came out of the gate hard while staying with a clump of Arkansas and UT runners but was unable to reach full stride during the beginning of the race. After the tight pack of runners began to spread out, Kigen was able to start finding his own pace.

“Coach told me to start around 30th place and push my way up,” Kigen said. He finished in 24th place out of 123 runners.

Manly elevated his performance by setting a new personal record in the 10K with a time of 31:47 and in 34th place, seconds ahead of Baylor standout Robert Morrow.

“I followed it (the raceplan) to a certain degree, but I went well above it,” Manly said.
Heins said Manly ran a smart race after being in 110th place at the 1K mark to finishing in the top 40.
“We did exactly what we talked about for the race,” Heins said.
With the season at a close for the teams and Stewart awaiting a possible bid; the teams can begin to prepare for next fall.

“I think we will get stronger, train harder and see improvement in everyone next year,” Mayfield said.