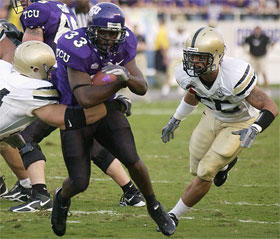 The Mountain West Conference’s second-best rushing defense meets the NCAA’s seventh-place rushing attack Saturday when the Horned Frogs, ranked No. 21 in the Associated Press poll, head to Colorado Springs, Colo., to play Air Force. The Falcons, 3-4 overall and 2-3 in conference play, will showcase the unconventional triple option offense, a style that emphasizes the running game and requires a diverse and talented backfield.

Sophomore linebacker David Hawthorne said the defense will have to stay disciplined.

“Everybody has a specific gap, a specific location,” Hawthorne said. “If everybody is where they’re supposed to be, we can keep the offense from clicking.”

Head coach Gary Patterson said the TCU offense will be just as important as the defense in containing Air Force’s ground game.

“The best way to beat a triple-option team is to have your offense control the ball,” Patterson said. “But the biggest thing is to not fall behind.”

Falling behind early is something the Frogs have been able to avoid in recent weeks. TCU has outscored its opponents by a total of 51-7 in the first quarters of its last three games.

The defense has been closing out games with equal efficiency, and has allowed only 24 fourth-quarter points all season.

The fact that the Falcons’ offense centers on the run doesn’t necessarily provide relief for a defensive secondary that has been torched all season long by star receivers. Wide receiver Jason Brown has 28 catches for 506 yards and two touchdowns on the season.

Patterson said Brown has the physical gifts to cause problems for opposing defenses.

“Brown is 6 feet 4 inches tall and 225 pounds – that’s a little different than a 6-foot, 185-pound receiver,” Patterson said. “It’s a totally different animal when he’s coming in and cracking on your 5-foot-10-inch defensive backs. He’s the kind of guy you start looking for out of the corner of your eye.”

Senior cornerback Drew Coleman said Brown can change the game just as much as the Falcons’ backfield.

“Anytime he’s out there, you have to have your eye on him,” Coleman said. “We know he’s their go-to guy, so we have to make them beat us with the pass.”

Statistics suggest the trenches could be critical to Saturday’s game.

Air Force has only allowed seven sacks all year, the best in the Mountain West, whereas TCU has sacked opposing quarterbacks 23 times, also first in conference.

Patterson said a strong running game is not the only reason the Falcons protect their quarterback so well.

“They have a very good offensive line,” Patterson said. “They have two guards who are (about) 6-foot-8-inches. To be at a (service) academy and to have linemen that big isn’t exactly normal.