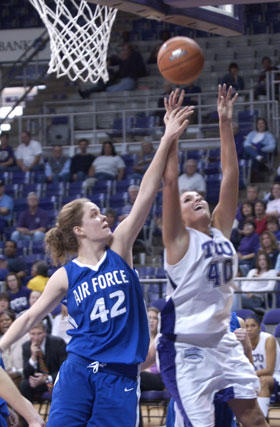 The Lady Frogs (10-6, 4-1) will look to improve their losing record against ranked teams tonight when they play No. 20 BYU (15-1, 4-0) at Daniel-Meyer Coliseum.TCU, which was outscored 391-282 in its five losses to top 25 teams this season, got its only win over a ranked opponent on Jan. 11 against then-No. 18 New Mexico. That victory marked the first in the four-game winning streak the Lady Frogs will look to extend tonight.

Head coach Jeff Mittie said BYU is not only a complete team, but an efficient one as well.

“When I look at them on tape,” Mittie said, “they don’t make mistakes and they don’t beat themselves.”

But the Cougars’ 15-1 record shows they do beat just about everybody else, and the production of senior forward Ambrosia Anderson has been a big part of that success.

Mittie said Anderson may be one of the better players in women’s basketball.

“Anderson is playing at an elite level for both the conference and the league,” Mittie said.

Anderson, BYU’s leader in both points (19.4) and rebounds (7.9) average, is difficult to guard because of her match of speed and size, Mittie said.

“She can go inside and she can go outside,” Mittie said. “I don’t think one player can contain her for 30 or 45 minutes. We’ll have to use a variety of things defensively.”

BYU is also very good defensively however, and is only allowing opponents to score an average of 52.3 points each game. Sophomore guard Adrianne Ross said that while the Cougars are a tough nut to crack, TCU may have an athletic edge.

“They’re a very solid defensive team,” Ross said. “But I don’t think they’ve played someone as quick as us this year. We should also be able to post our guards, and that’s an advantage.”

Regardless of individual talent, Mittie said BYU operates as a team defense.

“They’re going to do a lot of switching,” Mittie said. “They’ll play multiple defenses. Even though they don’t extend the defense out as often as we do, they’ve shown that they will.”

Mittie said that although the Frogs are enjoying their four-game winning streak, they refuse to become overconfident.

“We don’t have to go back very far to remember where we were,” Mittie said. “Part of being in a new league is the unknown. That always helps you prepare better.”

“Our league is having a great year,” Mittie said. “Anything can happen … anybody can beat anybody.