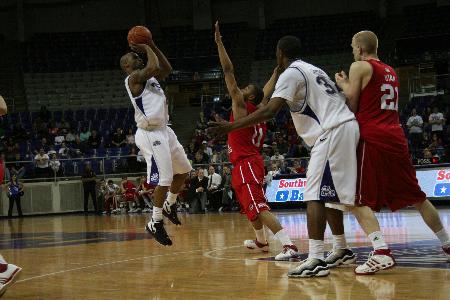 With only three games left in the men’s basketball regular season, the Horned Frogs have to win at least one game on the road, where it has only won once this season, to finish .500 in the conference.

The Horned Frogs are 6-7 in the Mountain West Conference with three games left, meaning TCU has to win two of its last three games to avoid a losing conference record.

Two of the final three games for TCU are on the road, where it is 1-9 on this season.

The six conference wins this season equal TCU’s win total for its first two seasons as a member of the Mountain West.

Sweet 16 contestants last year, the Rebels lost their two road games before the conference schedule began and are undefeated at home against Mountain West teams.

When UNLV visited Fort Worth on Jan. 30, the Runnin’ Rebels took the game 70-58, the second of four consecutive losses for TCU.

Head coach Neil Dougherty said the team believes it can win its remaining games if it maintains an intense approach.

UNLV currently ranks second in the Mountain West Conference at 10-3 and 21-6 overall.

In the first matchup between the Horned Frogs and the Rebels, UNLV junior guard Wink Adams torched TCU with 25 points and five assists.

TCU sophomore guard Keion Mitchem said the team is going to try and limit Adams’ touches and force him to take tough shots, but said this is not a guarantee for stopping the guard.

“Part of the reason he had a good game last time was because he hit some of those tough shots,” Mitchem said.

TCU’s senior guard Brent Hackett led TCU against UNLV with 19 points and junior forward Kevin Langford chipped in 17, but it was not enough to overcome TCU’s 37.5 percent shooting night compared with UNLV’s 48.1 percent.

The game also featured a perfect free throw night. TCU hit all 15 of its attempts and UNLV was perfect going 9-9 from the charity stripe.

Junior guard Henry Salter, who is the second leading scorer for TCU with 13.3 and tied for second in rebounding with five a game, was injured inside the first two minutes of the first contest between the two teams.

Salter will again be unable to help TCU against the Rebels, this time out of the game with an indefinite suspension for conduct detrimental to the team. This will be the second missed game for Salter, who also missed Wednesday’s game against Utah. Senior guard Ryan Wall started in his place and scored seven points, but Dougherty said his approach to the guard spot could change against UNLV.

“It really depends on what we feel is important once we put a game plan together,” Dougherty said. “Whether it’s an injury or suspension you want people to step up the intensity.”

Hackett said the possibility of finishing .500 in the Mountain West is not the team’s main focus but something it hopes for.

The Horned Frogs also have games at Air Force Academy on Wednesday, March 5, and its final game is at home against BYU on March 8.