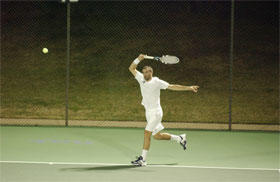 The men’s tennis team won the first match of Wednesday’s doubleheader by a resounding score of 6-0 over Wichita State – but not every one of those wins came easy.Long after the afternoon match had already been clinched with four TCU victories, senior Rafael Abreu and sophomore Cosmin Cotet were still battling for victories that, while meaningless for the win, proved to be statement games for a roster that is struggling to find its groove after a difficult stretch in its schedule.

Head coach Joey RivÂ said the Frogs’ performance against WSU was a good sign for his players.

“It just goes to show that some of these times, playing these matches, you can really lose some confidence when you go through a tough stretch,” RivÂ said. “It’s tough to learn how to win again. That’s kind of what we saw today – was their ability to kind of figure it out at the end, make some changes and come through.”

Abreu, who fell behind quickly, 6-3, against WSU’s Goran Vujaklija, clearly was not on top of his game early.

Vujaklija continually worked the corners and kept Abreu in constant motion for the first set but began to falter early in the second when the TCU senior’s conditioning began to show.

Abreu took firm control after he broke Vujaklija’s first serve and only lost one game in the final two sets.

Abreu said even though his win would count for little, maintaining focus is a necessity.

“I was focusing only on myself,” Abreu said. “You never know when it’s going to be a clinch match. We have to be focused on our game and cheer for the guy next to you.”

The Frogs’ were not done however, and had to immediately begin focusing on their evening match with Abilene Christian. RivÂ said he is confident in his team’s ability to handle two matches in a single afternoon.

“I feel like the guys are getting in good shape,” RivÂ said. “I’m not seeing too much moaning and groaning. Tonight we’ll move some guys around a little bit, but it should be a good match.