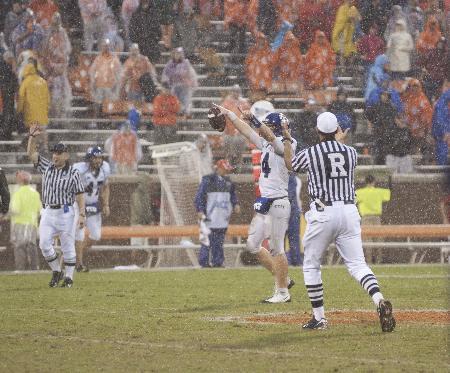 As rain fell like tears from the sky over Death Valley, the Horned Frogs and their faithful reveled during what seemed like a funeral procession out of the stands after the Frogs beat the Tigers 14 to 10.

With the rain coming down in sheets, the Frog defense came down on the Tigers twice with less than five minutes to play, shutting out Clemson’s chance to get back in the game and locking up the victory.

“We made it interesting defensively,” head coach Gary Patterson said. “We stopped people when we had to. I said going into the game that we had to stop the run and we could not allow Spiller or Ford to catch big passes, and it about beat us.”

TCU trailed at halftime, 10-7, but took the lead in with 12 minutes left in the fourth on a 24-yard touchdown catch from Antoine Hicks. Dalton under threw a fade to the front corner of the end zone which turned out to be a jump ball between Hicks and a Clemson defensive back. After an official review, the ruling stood that Hicks came down with the ball in the end zone for what would be the game winning score.

Junior quarterback Andy Dalton led the offense in both passing and rushing, running the ball 19 times for 100 yards. He went 17 for 26 passing for 226 yards and became the school’s second all-time leading passer with 5,326 total career yards. He passed Steve Stamp, with 5,123 yards, on a 58 yard completion to Ed Wesley in the first quarter.

“We were reading the end and seeing what he was doing,” Dalton said. “They were taking away our back which allowed me to run it.”

“We didn’t do a good job on the quarterback (Andy Dalton) today,” Clemson head coach Dabo Swinney said after the game. “We did a great job defending Joseph Turner, but we didn’t stop the rush from the quarterback as well as we needed today.”

The Frogs showcased the playmaking ability of junior wide receiver Jeremy Kerley, getting him the ball five times for 63 yards.

“We got him loose a couple of times and we need to do a better job of getting him loose on punts and kickoffs,” Patterson said.

The Frog defense had their hands full with senior halfback C.J. Spiller who rushed for 120 yards, bagged 79 yards receiving and returned the ball on special teams for 36 yards. Spiller had a legendary game, becoming the second player in college football history to rush for 2,500 yards, gain 1,000 yards receiving and 500 yards in punt returns. Spiller broke the record on a 60-yard pass from redshirt freshman quarterback Kyle Parker in the second period. Spiller also became Clemson’s leader in career receiving yards from a halfback with 1067.

Clemson opened up the scoring in the first with a 26-yard field goal from Richard Jackson with 8:21 minutes left to play in the first. The Frogs countered on the next drive with a 6-yard pass to junior wide out Curtis Clay, which Patterson called lucky.

After the 60-yard bomb caught by C.J. Spiller in the second, the Tigers gave the ball to their star once again who pounced his way in for the touchdown. The Frogs couldn’t muster another score before the half.

Most of the game was spent in a sort of tennis match; punting the ball back and forth. Both teams gained similar amounts of yardage, but TCU just edged out the battle of the tape. The Frogs rushed for 162 yards and passed for 226 yards while the Tigers rushed for 117 yards and passed for 192. TCU held the Tiger special teams to only 36 yards on two kick returns and no yards on punts.

“I think this will go a long way for our confidence to go and win on the road two out of the first three weeks of the season, especially coming to the East coast against a very tough ACC and give ourselves a chance to be successful,” Patterson said.

Patterson remembered the last time the Frogs came up with a big win in 2005, when they beat the University of Oklahoma in Norman but found their BCS dreams crushed the next week high on the hilltop at SMU. With SMU on the Frog’s radar this upcoming week, he said he hopes not to see a repeat.

12:46 remaining: TCU 14 Clemson 10. 25 yard TD from Dalton to Hicks. Dalton threw a fade to the goalline. Hicks and the defender both grabbed the ball but Hicks came down in the endzone with it. The play was reviewed but the ruling stood.

Andy Dalton has gone 9 for 16 for 134 yards. He also leads in rushing with 36 yards. The Clemson defense has shut down the Frogs ground game holding them to 61 yards. Clemson has been unable to mount a steady run game, only gaining 59 yards.

TCU 7 Clemson 10: Spiller with a 1 yard TD run after a 60 yard reception also by Spiller.

3:01 remaining: TCU 7 Clemson 3: Dalton passes complete over the middle to Clay for the TD. Evans hit the extra point.