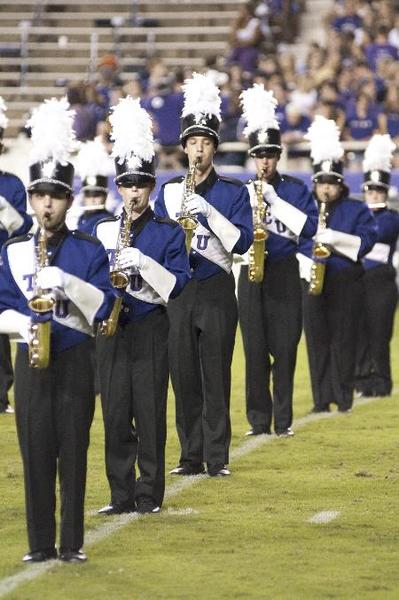 Clemson might see the presence of purple and white in its stadium Saturday, but fans there won’t hear the songs that have provided the soundtrack at the Horned Frogs’ home football games.

The football team will be traveling to the out-of-state game without the Horned Frog Marching Band because of funding issues.

Brian Youngblood, director of the Horned Frog Marching Band and associate director of bands, said that he had seen various message boards in which people have criticized the band for not being at away games to represent the university.

“It’s never because we don’t want to go,” Youngblood said. “We would love to have a presence at those games.”

Youngblood said it’s a matter of finding the financial means to get there for the band to go to the away games.

Message board posts on Web sites, such as Killerfrogs.com, have said the marching band’s absence at away games was because of a lack of school spirit. Drum major J.P. Wilson, a senior music education major, said these posts are the opposite of the truth.

“There’s a good majority of the kids that love football and would just hop on the bus, no sleep, no nothing, just go down there and go to the game and come right back,” Wilson said.

In the past, Youngblood said he had sent out e-mails to various avenues of funding every April before asking for funding for such trips. The state of the economy has made it hard to find extra funding this year, he said.

The band is also dealing with a campuswide 8 percent budget cut this year, Francis said.

“(There is) no wiggle-room at all in our budget,” Francis said.

Youngblood said the funding the band does receive must be split between equipment, music and travel costs.

Should the Horned Frogs make it to a bowl game this year, the marching band will travel with the team, Hesselbrock said. The funding for this trip would be taken out of the revenue the bowl game gives to the university, he said.

When the marching band traveled to away games in the past, such as New Mexico, it was a positive experience for the team, Hesselbrock said.

“You’re on the road, everything’s against you, and then all of a sudden, you hear the TCU fight song,” Hesselbrock said. “They’re so spirited, they’re so energetic. It’s just more of ‘us’ there.”