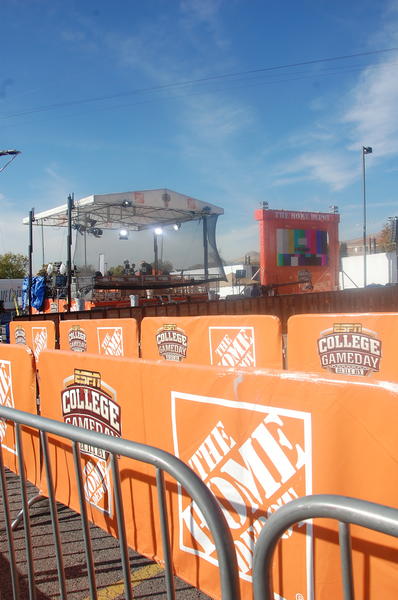 It was evident in the DFW airport as purple clad fans flocked to their gates and cheers of “Rah, Rah TCU!” echoed down the terminal, that this wasn’t an average football game.

On Saturday, the TCU No. 3 TCU Horned Frogs will take on the No. 5 University of Utah Utes in a game that could make, or break, the season for both. The Mountain West Conference foes are both undefeated on the season and are looking to move their way up the BCS ranking with a win this weekend. TCU is 9-0 and Utah is 8-0.

The Horned Frogs head into Saturday’s game allowing only 16 points in the last 5 games in the hopes of breaking the Utes’ 21 game home-win streak. The Frogs are favored by 4.5 points, according to nbcsports.com.

On Friday morning, ESPN College GameDay’s Kirk Herbstreit said that while TCU is the favorite in the rivalry matchup that they should watch out for Utah, especially the Utes’ sophomore quarterback Jordan Wynn.

Herbstreit broadcast his “Saturday Stories” from the Utes Rice Eccles Stadium parking lot on Friday, the site of Saturday morning’s College GameDay. This is TCU’s third College GameDay appearance in the last two years &- the second consecutive for the TCU vs. Utah conference showdown &- and the Horned Frogs are 2-0 in those matchups so far.

While fans were allowed to campout at GameDay starting early Friday morning, at 7 p.m. there were few to be found and little red on the streets of downtown Salt Lake City. Local businesses showed their support with signs and window displays, but the atmosphere in Utah was not one of anticipation.

Tickets for Saturday’s 2:30 p.m. game are sold out, and even media are being turned away. According to an article in Deseret News, 218 media credentials have been issued and more requests have been turned down. This proves that this game is garnering a lot of national attention.

As the only conference with two teams currently in the BCS top-five, this game could mean a lot for not only the schools, but also the non-automatic qualifying Mountain West Conference.