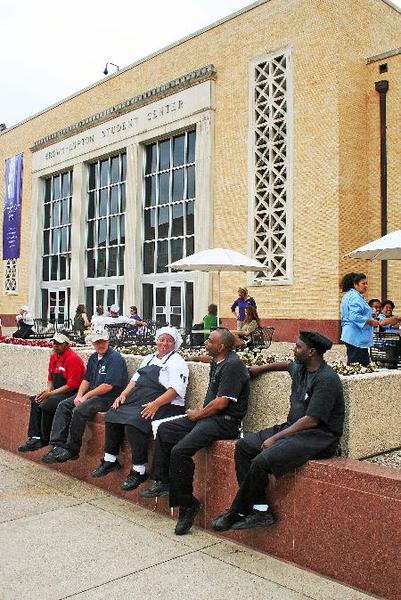 A broken gas line from a construction accident resulted in two separate evacuations from the Brown-Lupton Student Center and Reed Hall, and disrupted classes Wednesday.

Larry Markley, director of the Student Center, said he called the Physical Plant after staff members began to smell natural gas leaking into Suite 111 at the north end of the building.

“They (Physical Plant) came over and said that we needed to evacuate,” Markley said. “It wasn’t in the building, but some of the gas was leaking into the building.”

“Someone dug into an underground steel natural gas line and penetrated the steel, so gas was escaping as a result of that action,” LaVonn said. “Unfortunately, that happens more than we would like.”

Students and faculty members were asked by TCU Police and other staff members to leave the buildings. The broken line was in the construction area between the Student Center, Jarvis Hall and Foster Hall.

“After the Student Center was evacuated, the fire department was called immediately and they did a gas test to ensure that Foster Hall would be safe,” Abad said.

Karla O’Donald, a Spanish instructor, evacuated from Reed Hall shortly before her noon class began. She and her students met outside in the Student Center courtyard for class, though O’Donald said not all students showed up.

“There’s no time to waste,” O’Donald said. “We’re getting to the end of the semester.”

Maggie Roberts, a freshman nursing major, was with her friends when she saw students beginning to re-enter the Student Center about 12:10 p.m.

“We went inside just after they started letting people back in,” Roberts said. “We sat down to eat lunch and then we were told by TCU Police to leave due to a major emergency.”

See video from the gas leak

Markley said the building was evacuated for a second time around 12:24 p.m.

Grill 155 cook Larry Webb said he was told to leave the Main after being inside for about 10 minutes.

“I’ve never seen a gas leak in the Student Center in my five years working here,” Webb said at the scene.

The closing of the Student Center brought students outside, sending many to the hamburger stand as an option for lunch.

Amanda Mitchell, a supervisor for the Main, said the stand eventually ran out of supplies because employees were unable to get back into the building, which was guarded by TCU Police until it reopened about 1:10 p.m.

LaVonn said crews fixed the problem with no effects on other buildings.

“I can’t tell you if it was a permanent fix that was made to the natural gas line or a temporary fix,” LaVonn said. “Either way, crews will make sure that that line is safe.”