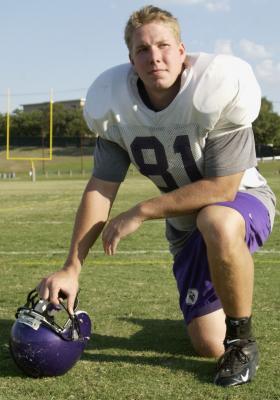 Who is your role model?
Brett Favre, Green Bay
Packers

What’s your idea of a
perfect day? Wake up, no
class, no practice. I
would spend the day
hanging out with friends
by the pool.

When you were younger,
what did you want to be
when you grew up?
Probably a fireman.

What’s it like playing for
TCU? I think playing for
TCU is a lot of fun over-
all because I have a lot of good friends here.
It’s good to play with them and go out Saturday
and do something I love to do.

Patterson said Andrus is expected to be an integral part of an offense that features only two players with no starting experience.