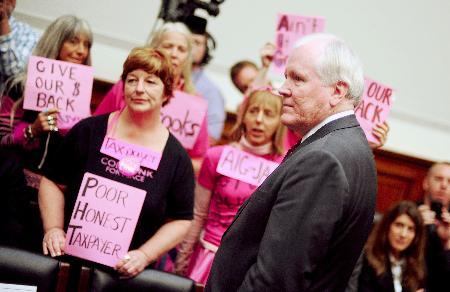 American International Group, the massive failing insurance firm which is now 80 percent owned by the U.S. government, recently announced $218 million in bonuses to top executives working in the financial products unit of the company, the division that drove the company into financial ruin only a short time ago.

Public outcry against this apparently egregious act erupted immediately after the news broke and Washington was quick to point fingers at Wall Street and join in on the protest.

Why the sudden outrage?

Last December, Merrill Lynch shelled out $3.6 billion in bonuses to its executives, and there wasn’t half the public outcry there is now.

These bonuses shouldn’t have come as a surprise. AIG publicized the plan to pay out year-end bonuses to company executives last fall and also in a November U.S. Securities and Exchange Commission filing. The Wall Street Journal reports that it was also included in a filing made last May.

The House hurried to pass a bill that would tax all bonuses this year at 90 percent in order to retrieve some of the taxpayers’ money.

But it’s not that simple; these bonuses are a way that large companies pay and retain their employees and are written into binding legal contracts that can’t simply be revoked at Washington’s call.

Some top White House advisers said the House tax constitutes a bill of attainder, legislation declaring a group of persons guilty of some crime and punishing them without benefit of a trial, which is specifically unconstitutional.

The fact that President Barack Obama, Treasury Secretary Timothy Geithner, and Congress all claim they learned of these bonuses only within the last week shouldn’t exempt them from blame. Anyone paying even the slightest attention to this would have seen it coming.

Tyler Zodrow is a freshman finance major from McKinney.