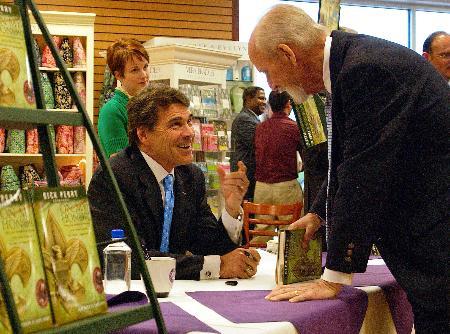 Gov. Rick Perry defended the moral values of the Boy Scouts of America at the TCU Bookstore on Thursday evening at his book signing.

In a brief speech before the signing of his book “On My Honor: Why the American Values of the Boy Scouts Are Worth Fighting For,” Perry said the organization was the most important influence in his life.

Perry told the crowd of more than 100 people that being a Boy Scout instilled him with a set of values that he carries on to this day.

“Scouts learn not only how to be kind but how to put others first,” Perry said.

He said he wrote the book “to rally support for an institution whose values have been under attack lately.”

The Boy Scouts have received criticism for their policies excluding gays and atheists, which were validated by the Supreme Court in 2000.

Rohail Premjee, a 15-year-old Life Scout, said he went to the book signing because he wanted to show support for Perry’s appreciation of the Boy Scouts.

“I think the main core of Boy Scouts is growing up and becoming a man,” Premjee said.