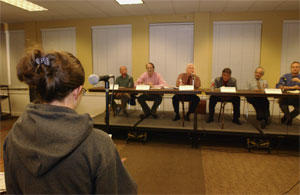 Students offered their opinions on the debate about changing to a plus/minus grading system before a panel of faculty members Tuesday night at a forum co-hosted by the Student Government Association and Faculty Senate. The forum was the beginning of a process to research the possibility of a plus/minus system and get student feedback, but there are details that still need to be worked out before the system could be implemented as early as Fall 2007, David Grant, a religion professor, said.

One of those issues was brought up by freshman Olivia Chilton, who said a plus/minus system would make it harder for 4.0 students to maintain their 4.0 because there is no A+ on the proposed scale.

Research that can backup Chilton’s claim can be found at faculty.tcu.edu/grant/plus-minus, a Web site that offers information about other universities that have considered the plus/minus system.

“There will be fewer 4.0’s,” Faculty Senate Chairman Andy Fort said. “But a plus/minus system would discriminate the truly extraordinary from the just extraordinary.”

A number of other students were concerned a plus/minus system would hurt students that need certain grades to maintain scholarships and financial aid.

“The Faculty Senate’s Academic Excellence Committee will investigate that issue with the financial aid department before a final proposal is made,” Grant said.

Another panel member, Magnus Rittby, a professor of physics and astronomy, said he is opposed to a plus/minus system because he doesn’t want to be put in the position to choose between a B and a B+.

This concern was shared by computer science professor Dick Rinewalt.

“Is the plus/minus system worth the additional anxiety for students and the additional work for faculty to draw more lines of distinction for grades?” Rinewalt said.

Several students also wanted to know, if the system is implemented, if it would affect all students or just incoming freshman.

Grant said that is another issue the Faculty Senate’s Academic Excellence Committee will have to discuss with the registrar’s office before a final proposal can be made.