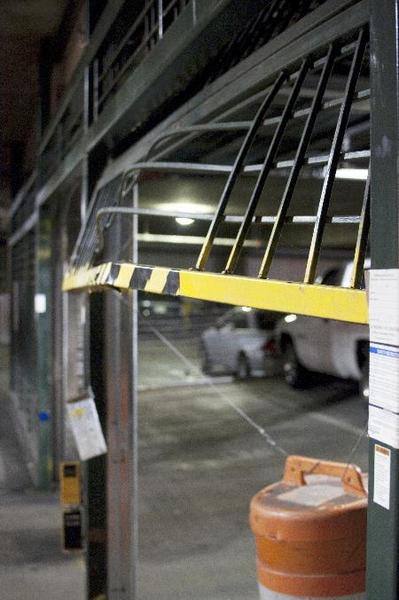 A security camera dangles from its broken base in the parking garage, pieces of glass from broken beer bottles litter the halls and walls feature a variety of scratches, holes and dents. Residents of the GrandMarc deal with vandalism like this on a daily basis.

Sophomore pre-major Shannon Gomez said she has noticed missing artwork in the GrandMarc, as well as trash and other questionable substances in various elevators in the building.

“I pay so much money to live here, and I expect it to be clean and working right,” Gomez said.

Tobi Sander, the GrandMarc’s director of community operations, said a recent vandalism involved the entrance gate into the GrandMarc’s resident parking garage, which requires a remote control to activate. The gate currently has an orange traffic barrel blocking it because a car rammed into it last Saturday.

One of Sander’s first areas of business in the fall of 2007 was the installation of 42 security cameras in the hallways of the GrandMarc’s North and South towers because of the excessive vandalism. Every floor has four cameras, which Sander said has sufficiently reduced damage in the hallways and allowed her to identify and charge people for damage done.

Sander said in the past urination, defecation and vomiting in certain elevators and hallways has been an issue.

The most expensive damage she encountered was when a resident broke an elevator. That resident was charged $7,200 for damage and subsequently moved out of the GrandMarc.

“We didn’t have to evict him,” Sander said, “He made the full payment and moved, or we would’ve pressed charges.”

Don Mills, vice chancellor for student affairs, said this resident’s damage report is currently in the process of being reviewed. Mills said he could not comment on what the university may do to the student responsible for damaging the elevator because of privacy laws. However, Mills said, there will definitely be serious repercussions.

“That kind of behavior is unacceptable and won’t be tolerated,” Mills said. “Vandalism is the height of irresponsibility.”

Mills said at this point no residents other than the student who damaged the elevator have committed damage serious enough to get in trouble with the university.

Students could have to face the university advisory board, have a mark on his or her record and, if the damage was severe enough, face expulsion from the university. Vandalism charges are judged on a case-by-case basis, Mills said, so there is no minimum penalty or set action for damage.

He also said the Office of Campus Life would get involved with destruction cases because it goes against the Code of Student Conduct.

Mills said the university is trying to decrease the amount of alcohol consumed in the GrandMarc and on-campus residence halls.

“Virtually every problem in the GrandMarc and on campus is due to alcohol violations,” Mills said.

The way to decrease vandalism, Mills said, is for the university take a very strict stance on alcohol violations and to educate students to be more responsible for their homes.

Sander said the majority of damage incurred this year has been the result of kicked and or punched holes in the walls of the stairwells. She said she is trying to get security cameras installed in the elevators and stairwells and hopes to install them in the elevators as early as spring 2010. It cost $70,000 to put cameras on all floors of the GrandMarc and to keep them running at all hours, she said. It is unfair for the residents who behave well to suffer high rental costs because of other residents’ destructive natures, Sander said.

The GrandMarc has patrolmen walk the hallways daily and respond to lock-outs and noise complaints. Other than that, she only has a staff of four people to keep the GrandMarc clean and running, Sander said.

No. of violations before eviction: 4

No. of security cameras in the GrandMarc: 42