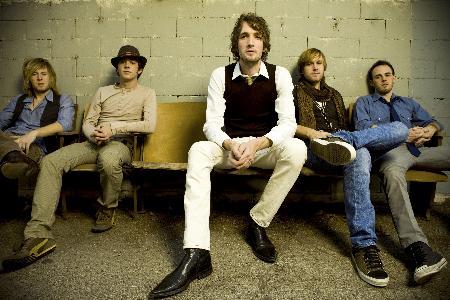 Six years ago, five high school students recorded an album in a Fort Worth church basement. Lots of local support and a major record deal later, Green River Ordinance has released its label debut, “Out Of My Hands.”

Lead singer Josh Jenkins said the album is a testimony to the band’s work over the past year. Signed by Virgin Records in 2007, the band was ecstatic, but at the same time Jenkins said they understood the weight of the new responsibility.

“We wanted to produce a great record, but the creative process is a tricky one and you can’t force good songs,” he said.

The band knew it was time to work harder than ever, Jenkins said.

The tracks on the new album are based on real-life experiences with content most people can relate to, Jenkins said. Some are a product of a jam session in the practice room while others are unplanned, he said. Jenkins and guitarist Josh Wilkerson live together, which he said allows for more spontaneity.

“A lot of ideas just start with us at home on a piano and a guitar,” Jenkins said.

The band met in high school through their shared desire to pursue music as a career, not just as something to do on the weekends, he said.

Brothers Jamey and Geoff Ice formed the original Green River Ordinance at the ages of 14 and 16. The band name came from a street sign they found in a garage, Jenkins said. The name stuck, unlike the multiple musicians who played with them over the next few years.

It wasn’t until Jenkins, Wilkerson and drummer Denton Hunker joined them that the band was finally established.

GRO toured for a year and half mostly playing colleges and bars. They soon gained enough recognition to tour with bands like Third Eye Blind and Collective Soul. In 2006 they opened for Bon Jovi in Dallas and while playing a showcase in New York, the band landed its deal with Virgin Records.

“A band is a melting pot of different ideas and is constantly changing, Jenkins said.

From writing songs to playing live shows all over the country, GRO’s style has evolved over the years from blues-rock to pop-rock.

But one thing remains the same: the members of Green River Ordinance remain loyal to their Fort Worth fan base and still love playing at local venues like the Aardvark.

“Everywhere we go, we always tell everyone we are from Fort Worth,” Jenkins said. “We are not moving. This is our home.”