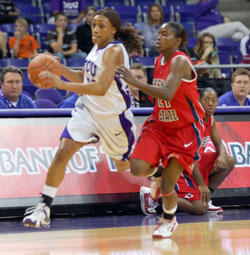 After finishing a layup off her own missed 3-point attempt, Adrianne Ross was feeling it.It was just one of eight buckets in a half to remember for the Lady Frogs’ All-American guard, who dropped 19 points in the first half. Her offensive output steadied the pace for TCU’s 75-63 win against Fresno State Wednesday night.

The win snaps a two-game skid and was the team’s 23rd win in its last 25 games at Daniel-Meyer Coliseum, erasing the bad taste of a rare home defeat against Cal on Nov. 23.

Ross’ showcase had her shooting eight for 14 from the field in just 17 minutes of play. Although the senior guard cooled off in the second half, going just two for six from the field, the damage had already been done.

She finished with 23 points, four assists and four rebounds, while having to adjust her style of play to be more pass-first in the second half.

Ross also made her way up a couple of career record lists by moving to No. 4 all-time in points with 1,308 and No. 3 all-time in field goals made with 450.

Aside from Ross’ first-half performance, there was also a game.

With all of the bumps and traps Fresno State’s defense presented to TCU, head coach Jeff Mittie said he was satisfied with his team’s ability to finish possessions with points on the board.

“I thought Lorie Butler(-Rayford) and Adrianne Ross all had some good reads. When I look back at the shot chart of that group, I thought there was a lot better offense there.”

In less than six minutes during the second half, senior forward Butler-Rayford and sophomore guard Danielle Nunn helped carry the Lady Frogs’ offensive attack, going for 13 of 17 points during an almost eight-minute stretch.

Nunn finished with 13 points off the bench, one shy of her career high, as Butler-Rayford chipped in 14 points to go along with five rebounds.

Nunn said she was relieved knowing the hard work put into Wednesday night’s game against a tough penetration offense paid off.

“We worked on a lot of penetrations yesterday in practice, so we worked on the offside giving help to the ball and just staying head up on them and playing defense,” she said.