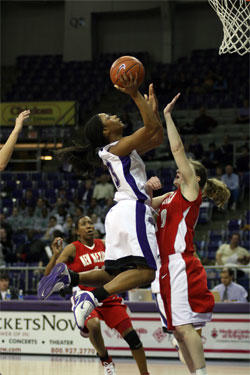 “It feels good to know that I’m a better player,” Ross said. “If I would have come in, still playing like a freshman, taking some of the shots I took, I wouldn’t have gotten to 1,000.”

Ross’ 1,000th point was scored with 7:51 left in the first half; she celebrated with a small slap of a hand but mentally never left the game.

Against the Lobos the Lady Frogs played aggressively and with intelligence, head coach Jeff Mittie said.

“We weren’t just aggressive,” Mittie said. “We were aggressive at the right times on all the right players.”

Mittie said the Lady Frogs’ communication had improved and problems were fixed promptly.

“We were five players out, there playing as one,” Mittie said.

After two conference losses on the road to the Wyoming Cowgirls and Utah Utes, Mittie said they weren’t playing smart and the fouls added up.

“I felt that we were a little tentative at times,” Mittie said.

The players knew what they were doing wrong, Ross said.

“It was just a matter of taking what we did in practice and carrying it into the game,” Ross said.

Lorie Butler-Rayford, a junior forward, said it was also a matter of discipline and staying focused throughout the contest.

The losses cost the Lady Frogs top 25 standing in the USA Today/ESPN poll.

But Mittie said the team does not need to focus on being in the polls.

“I do think for us right now, to fight and scrap to get back in there would be a bad thing for us,” Mittie said.

Another notable performance came from Butler-Rayford whose craftiness under the rim resulted in 19 rebounds.

“Rebounding is a part of my game,” Butler-Rayford said. “They were there so I took them, I tried at least.”

The Lady Frogs’ next game is Sunday at the coliseum against the San Diego State Aztecs (9-7, 2-3 Conference).