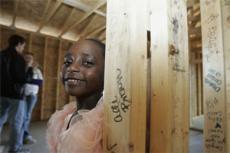 Diuedonne Kazabukeye and his family received the keys to their new Trinity Habitat for Humanity home Saturday at the FrogHouse dedication – and when the home is finished, he can use them.Habitat Construction Manager Jamie MacCammond introduced the family to a crowd of volunteers and Habitat personnel.

MacCammond said Kazabukeye and Marcelina Niyonzima have four children, and Kazabukeye’s two brothers will also live with them in the five-bedroom house.

Kazabukeye spoke to the crowd of volunteers and Habitat for Humanity personnel in Swahili, which was translated by Pastor Chacha Mwita of Tumaini Baptist Church.

Kazabukeye said he wanted to thank the volunteers for their help on the home. He accepted the keys to the unfinished house along with a Bible from the volunteers.

Shannon Chambers, a junior secondary education major, led the presentation, giving the keys to the family.

“At this time we really just want to thank the family for letting us have the opportunity to make a difference,” Chambers said.

“I think it finalizes the task that was put in front of them – that they have completed their goal,” Jordan said. “Even though the house isn’t finished, this is kind of a celebration of all of their efforts, and that what they’ve done has really meant something to another person in the community, and to an entire family in this case.”

Jordan said the home is behind schedule because of weather delays. The remaining build days for TCU volunteers are March 17 and 18. The family is scheduled to move into the home at the beginning of April.

Mwita said those who worked on the house are welcome back.

“We pray that this will be a house of prayer,” Mwita said. “Diuedonne and his family have already opened this place for us. We can come in. Diuedonne has his house open, and you can have prayer in his house.”

After the dedication, those present were encouraged to walk through the home and sign the studs holding up the walls.

MacCammond said what started as building materials six weeks ago has now become a home.

“I look at this project as one word, and that word is transformation,” MacCammond said. “We have taken a pile of two-by-fours, boxes of nails, sheets of plywood, and we have transformed that into a home; and that home has helped transform the people that have worked here.”

“I think the thing I liked most was seeing the house go up because you walk in today and you see the walls that you built, and you see the actual house taking shape versus the concrete slab that it was a couple of weeks ago,” Chambers said.

MacCammond said TCU volunteers and Habitat for Humanity personnel have worked about 10 and a half days on the house.

Lydia Johnson, home ownership coordinator, said the family is living in an apartment in Euless while the home is being finished.

Katherine Niederer, junior finance and accounting major, said it is great to see the project near completion.

“We have run the mile for it, and we are in the last 100 yards,” Niederer said. “It’s great to see the finish line right in front of us and under our feet.”