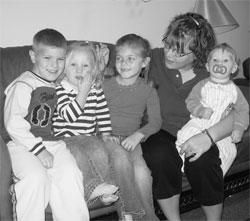 Christy Lehew, the hall director for Brachman Hall, gently asks her 2-year-old daughter to sit at the kitchen table. Kara hesitates but then obeys.She hops into the seat next to her 4-year-old brother, Kyle, and her big sister, Kayla, 6, springs to action, taking charge of preparing an afternoon snack for her younger siblings.

A chorus of chattering and singing follows Lehew as she walks into her living room from the kitchen just as one of her residents pops his head in to discuss a meeting scheduled for that evening.

“It’s a team effort around here,” Lehew said with a smile.

With four children ranging in age from 6 years to 8 months and 150 residents, Lehew said, she has finally realized she can’t be in control.

“The joy of having a large family comes with sacrifices,” she said. “But I wouldn’t change anything. I can’t imagine doing anything else.”

Edward Tran, a sophomore computer science major and resident of Brachman Hall, said having a family in the residence hall reminds him of home.

“It’s refreshing to see kids running down the halls,” Tran said. “It just reminds me not to take myself so seriously.”

While unconventional, Lehew said, she couldn’t be happier about having a full house and a dorm full of college students.

As a junior education major at John Brown University in Siloam Springs, Ark., Lehew said she found her calling while working as an assistant hall director in her dorm.

“I loved what I was doing,” she said. “When I found out I could do it for a living and wouldn’t have to be taking classes, too, it was the only full-time job I applied for after graduation.”

Since then, Lehew has worked as a residence hall director at five other universities, including her alma mater.

She is in her seventh year at TCU with her husband of 10 years, Tony, who owns his own business in Fort Worth.

“It wouldn’t work if I had to do it on my own,” she said. “My husband helps a lot with the kids, and his job usually allows him to be here if I need him.”

Lehew isn’t the only mother on campus with a lot on her plate.

“There are other hall directors with families at TCU,” she said. “It’s great to have a support group that understand what it’s like.”

Lehew said she and the other mothers swap children, help each other manage their busy schedules and plan play-dates for their children.

“Having a community like that is so helpful,” she said.

Lehew said she is always on call for emergencies while she is in the dorm. Between five and 10 times a month, she gets woken up by a phone call from either a student, residential assistant or the police regarding a problem or emergency, she said.

Lehew said she also spends about 15 hours a week in meetings, five to eight hours a week planning events for students and 15 to 20 hours a week visiting and meeting with students.

“I definitely have my meltdown days,” she said. “On those days, we pack up and go to a park somewhere.”

Lehew said this allows her and her children to get away from campus and spend time together as a family.

Living in a residence hall, while not the norm for families of six, is something she said she is glad her children are able to experience.

“It’s all our kids have ever known,” she said. “They’re very social and love spending time with students.”

Being surrounded by college students has created opportunities to talk to her children about important issues, she said.

Lehew said she knew her children were aware of what was going on around them when Kyle started “smoking” a crayon.

“My kids are learning a lot,” Lehew said. “We’re able to talk through things as they come up.”

Lehew said she never has to go far to find help, whether it’s for a “kid emergency” or just a busy day.

“Students are so willing to help out,” she said. “If they see a need, they’re at my door in seconds. People really watch out for us.”

Justin Avery Anderson, a sophomore entrepreneurial management major, said he loves to talk to the Lehews at the end of his school day.

“I think a lot of the residents feel like big brothers and sisters to the Lehew kids,” he said.

Anderson said he sees Lehew as a mother figure and frequently stops by the office to talk to her about things going on in his life.

“She is always willing to listen,” he said. “She’s very giving of her time.”

Lehew said she enjoys being a part of students’ lives.

“Students come to talk to me when they’re excited about things or need advice, just like they would their parents,” she said. “It’s fun to live beside them and watch them make life-decisions and start thinking about their future.”

Newton said he looks up to Lehew and admires her ability to juggle her family and work responsibilities with such grace.

“One day, I’ll have a family of my own and will have to learn how to balance my time between my family and my work,” he said. “If I can find someone who can do it all as well as she does, I would consider myself lucky.”

Lehew said that as time goes by, she is more confident she is in the right field.

Even with late hours, busy schedules and responsibility for 150 residents, Lehew said, she loves working with college students.

Lehew said it makes her nervous to even think about living in a normal, quiet house someday.

“We love the noise and activity,” she said. “Some people live by trains, some by busy streets. We just live in a dorm.