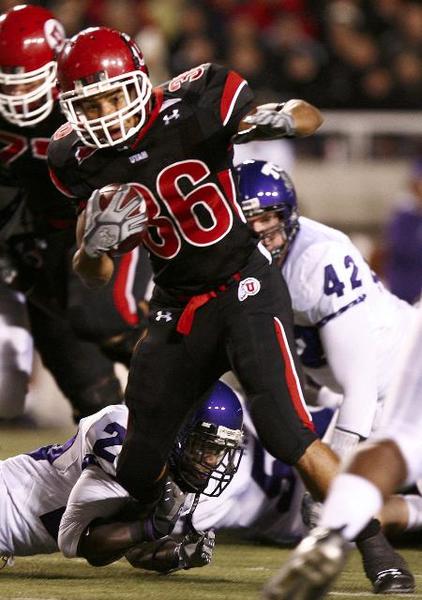 With TCU hanging onto a 10-6 lead late in the fourth quarter, all Utah’s defense wanted to do was give its offense a chance. Two empty drives and a game-ending interception later, Utah’s defense had done all it could to keep its BCS hopes alive.

“This whole game was rough, man,” said Utah (10-0, 7-0 MWC) safety Robert Johnson. “We just had to get the offense the ball, and we knew they were going to come through no matter what.”

“We had our chances to be up 16-6, and we missed two field goals,” head coach Gary Patterson said. “It’s one of those things. It’s two good football teams that played their tails off . they had some guys that could make some plays.”

Very rarely do advertisements live up to their promises.

“I gotta give a lot of credit to TCU,” Utah’s defensive lineman Greg Newman said shortly after the victory. They are tough. It was a hard-fought battle the whole game. When Robert (Johnson) got that interception, all the pressure was just gone. I’m drained right now; I’ve got nothing left.”

TCU came into the game ranked No. 1 against the run. That aspect of its defense lived up to that ranking, holding Utah to 45 yards rushing on 25 attempts.

Utah’s defense came into the game looking shaky in the first quarter. The No. 7 overall defense allowed TCU to score on its first two drives as the Horned Frogs collected 103 yards through the air and 99 yards on the ground in the first quarter alone to jump out to a 10-0 lead.

The Utes’ defense settled in considerably in the second quarter.

“The first quarter (TCU) came out and we got kind of rattled a little bit,” Johnson said. “We had to see where we were at. After the first quarter, we realized that they’re a normal offense just like anybody else. We just had to make sure we shut them down.”

TCU gained just six yards in the second quarter behind a Utah defensive effort that was able to put pressure on TCU quarterback Andy Dalton and a spirited crowed that helped force three false start penalties in one drive.

Kicker Louie Sakoda helped the defensive effort by pinning TCU inside the 20-yard line three times for the game.

While Utah’s defense was impressive after the first quarter, TCU kept up that effort for the entire game. But despite allowing TCU to gain 416 yards of total offense, Utah stopped the Horned Frogs when it counted.

“We were tired of hearing about TCU’s defense,” said Utah strong safety Joe Dale as fans surrounded him on the field. “We wanted to show we’re pretty good ourselves.”

When the Utes were able to move the ball on TCU’s side of the field, the Horned Frogs’ defense got stronger. Utah moved the ball across the 50-yard line seven times. The team got the ball inside the TCU 20-yard line just one time – the Utes’ game-winning drive.