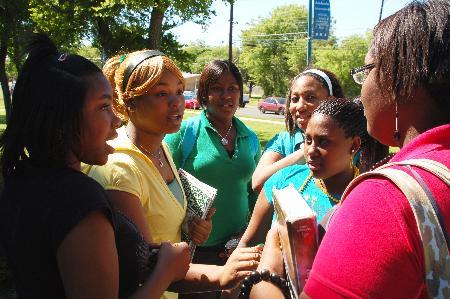 Check out the Skiff’s full report on urban education

Urban schools need more qualified teachers, but odds are against students from those schools ever becoming teachers themselves.

Out of the 13 million children living in poverty, only about half will graduate high school, according to the National Assessment of Educational Progress. The assessment shows even fewer will go to college, and even fewer will pursue careers as teachers.

To bring change, the Center for Urban Education has created the Aspiring Educators Initiative.

The initiative reaches out to three area high schools with a high minority population, said Jennifer Brooks, director of the Center for Urban Education.

Currently, the program is at Paul Laurence Dunbar, Polytechnic and Oscar Dean Wyatt high schools in Fort Worth.

The program began in summer 2007 with a luncheon for 75 high school sophomores, followed by small-group sessions to answer students’ questions. As high school juniors and seniors, the students then attend a series of events geared toward exposing them to the possibility of attending college and becoming teachers.

“We are looking at building our own in terms of educators for the future,” Brooks said. “We talk to them about the future and education, so that we can make sure we have a group of students ready to take my place and others when we are ready to retire.”

Cecilia Silva, an associate professor of education, said she hopes the program will add diversity to the teaching population.

“Most educators are white-middle class,” Silva said. “It is important that students see people who look like them in teaching roles.”

There is some evidence the program is working.

“It has really impacted my life,” said Kayara Watts, a senior at Dunbar. “Before this program, I only considered getting a minor in education. Now, I want it to be my major.”

Watts said the program inspired her to apply to West Texas A&M University to major in elementary education.

Barbara Novero, lead counselor at Dunbar, said 25 students from her school participate in the program.

Watts said her favorite part of the program includes trips to TCU and speaking with Brooks about a teaching career.

“Most of us want to major in education,” Watts said of the Dunbar students in the program. “She teaches us what ropes to go through and issues we will deal with. She asks us how we feel about being an educator, what our future goals are and what aspects of education we are interested in.”

The Aspiring Educators Initiative has a positive impact on students, Novero said.

“The students appreciate others’ coming and taking the time to recognize them and lead them in discussion,” she said.

Students also like the certificates of achievement, treats and TCU spirit wear they have received, Novero said.

The center expects an additional 75 to 85 high school students to take part in the program during its second year, with numbers predicted to double during the third.

For her part, Watts said she took seriously what TCU education students told her when they spoke at Dunbar.

“I learned that if they can do it, I can do it,” Watts said.