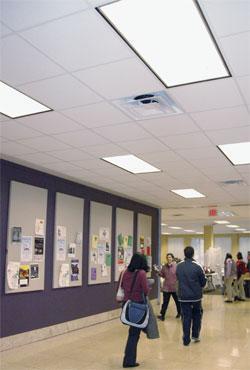 As utility prices continue a steady upward climb, local universities, including TCU, are coping with price increases by raising tuition, budgeting more for utility costs and renovating buildings to make them more energy-friendly.TCU is proposing to increase its $8 million utility budget by $1.5 million in the next fiscal year to accommodate the rising costs, said Brian Gutierrez, vice chancellor for finance and administration. He said rising utility costs have not yet caused TCU to go over its set budget for the year like they have at other universities in the area such as the University of North Texas (Denton) and the University of Texas at Arlington.

“As the year progresses, we compare the actual costs to our budget estimates,” Gutierrez said. “We also (factor in) weather conditions.”

He said the utility budget is assessed at least once a month, and it will become clearer if TCU has exceeded the allocated budget as the coldest months of the year approach.

Gutierrez said he hopes the contingency budget would be enough to cover any unexpected utility cost surges.

UTA is concerned that its utility costs will go up from about $9 million this year to as high as $13.5 million within the next two years, said Rusty Ward, UTA vice president for business affairs and controller. Ward said the university has not yet decided how to address the expected increase.

The Baylor University Board of Regents increased tuition by 8 percent and partly attributed that to a $2.4 million utility cost increase for the year.

Gutierrez said despite the rising utility costs, TCU students should not expect next year’s tuition to go up by more than 8 percent.

One of the reasons for TCU’s high expenditure of energy is because the university uses a four-pipe temperature system, said Will Stallworth, associate vice chancellor for plant management. A four-pipe system makes it possible for the campus to have both heating and air-conditioning throughout the entire year, he said.

Gutierrez said that although the system costs more, it is necessary for a university campus because many people are often in the same rooms during all four seasons, often requiring air-conditioning even in the colder months.

“You’ll have lots of uncomfortable students if you didn’t have (the four-pipe system),” Gutierrez said.

Stallworth said both air-conditioning and heating are needed throughout the year because of the changing climate.

Stallworth said another cause for the high energy usage is when computers are left on at night. However, he said that is necessary because the campus network virus definitions are updated on the computers at night.

“Right now, the convenience factor outweighs the need to conserve energy,” he said.

He said that might not be the case in the future.

Gutierrez said one of the main reasons the costs for utilities are going up is because of rising prices of natural gas. He said this also affects electricity costs because a lot of electricity in Texas is produced using natural gas.

Stallworth said TCU uses natural gas for heating and uses electricity for most other utility purposes.

LaVonn attributed the increase to two causes, the first being the price of natural gas will be higher because this winter is predicted to be colder than last year’s.

Lavonn said the second reason is because demand for natural gas in the United States has been rising continually because the government does not have an energy policy that promotes more exploration of natural gas. He said the demand has reached, and in some cases overcome, the supply of natural gas. LaVonn also said that Hurricanes Katrina and Rita had an effect on increasing prices by taking out more than 15 percent of natural gas production.

Stallworth said the university has taken many steps to conserve energy, which in some areas include installing more efficient light units, putting in double-paned windows to preserve room temperatures and producing ice during nighttime, when utility rates are the lowest.

Gutierrez said a communication campaign will also be a part of the effort to fight increasing costs. He said the campaign will aim to encourage all members of the TCU community to conserve energy, and it could be something the student government gets involved in.

“People will become more conscious that (everyone) plays a role in energy conservation,” he said.

John T. Harvey, the chairman of the economics department, said the fluctuation of utility prices is one of the main reasons TCU will not lock tuition rates for four years.

He said right now, TCU only needs to estimate prices for a year ahead when asking students to make a certain tuition payment. If university officials were to lock the rate for four years, then they would have to be able to estimate utility costs for four years. Harvey said that is hard to do, especially with unpredictable natural disasters like hurricanes Katrina and Rita that cause increases in utility prices.

Craig Allen, director of Residential Services, said tuition and residence hall rates may definitely rise because of utility cost increases, but he said that is not his only concern.

“Where does that money come from if we spend more than we planned to spend?” Allen said. “What things go away?”

Craig said some students may not realize that they can help keep the costs down by doing simple things in their residence halls, like turning off the lights or TVs when they leave the room.

“It’s a simple thing, but if everybody did it … those pennies add up to real dollars,” Craig said.